Many people refer to marijuana as a gateway drug to other illicit drug use. However, some researchers have questioned whether this presumption has distracted researchers from considering the possibility that other more easily attainable substances might act as gateway drugs – for example, nicotine (Volkow, 2011). The week’s ASHES reviews an animal model study that explores whether nicotine exposure is associated with later cocaine use behavior (Levine et al., 2011). 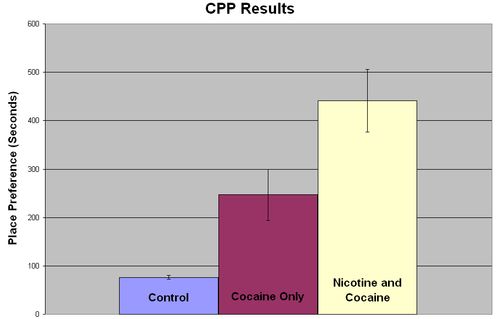 Nicotine exposure altered the brain’s response to cocaine for the above behavioral and physiological/molecular measures. This suggests that nicotine primes the brain to  enhance cocaine-associated rewards. The research design could be stronger if the researchers added an additional group, such as saline followed by cocaine, to control for the experiential effects of consuming a substance prior to cocaine. Without additional information it is difficult to attribute the priming to nicotine only. Nevertheless, this preliminary research could facilitate research for the development of new medication for cocaine addiction based on an understanding of the brain’s response to cocaine following nicotine exposure. It is also possible to speculate that smoking cessation could have an effect for cocaine addiction among those who are comorbid (Volkow, 2011).