« Addiction & the Humanities, Vol. 7(10) – Movies as an addiction treatment education tool for medical practitioners | Main | The WAGER, Vol. 16(11) – Slots and shots: Drinking patterns of pathological gamblers before, during, and after treatment »

Children who score relatively high on intelligence tests become relatively healthy adults, in some important respects. For instance, White and Batty (2011) noted that they are less likely to smoke, more likely to engage in physical activity, and more likely to eat healthy foods than their peers. However, research is equivocal regarding a link between childhood IQ scores and adult use of illegal drugs (as reviewed by White & Batty, 2011). In this week’s STASH, we review a recent longitudinal, population-based study investigating the connection between childhood IQ and adult use of illegal drugs (White & Batty, 2011).

Figure 1
Odds ratios and 95% confidence intervals for illegal drug use outcomes at 16 and 30 years, separately for men and women. Adapted from White and Batty, 2011. (Click to enlarge.) 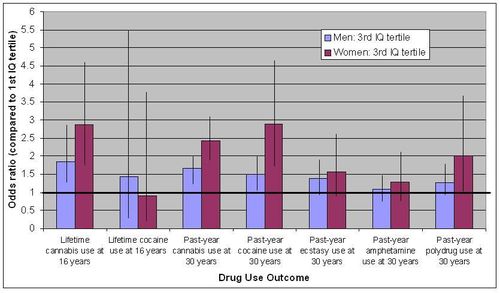 Conclusion
In this large, population-based cohort study, the authors observed a consistent pattern: higher childhood IQ predicted greater likelihood of illegal drug use during adulthood, independent of parental social class. The authors speculate about a potential pathway involving personality. According to this reasoning, high IQ individuals use drugs because they are characterized by traits linked with drug use, such as stimulation seeking and openness to experience. The presence of stronger associations for women than men requires further exploration, as does the potential association between childhood IQ and adult substance dependence and abuse.

* Preliminary analyses suggested that modeling IQ as a linear term was inappropriate.
** The interaction term between childhood IQ and participant gender for drug use outcomes was significant at 30 years but not at 16 years.
*** Comparisons between the moderate IQ tertile and the lowest IQ tertile were generally in the same direction. Readers interested in more details can see White and Batty (2011).