« Op-Ed/Editorials: The Division on Addiction is Celebrating its 20th Anniversary during 2012! | Main | STASH, Vol. 8(1) – Who are dual alcohol and marijuana users? »

Addiction & the Humanities, Vol. 8(1): DARE to be Ineffective? A look at Drug Education Programs in Schools

During 1983, Police Chief Daryl Gates created the Drug Abuse Resistance Education, or DARE program, which more than 80% of school districts in the United States use for educating students about resisting drug use. Every year, more than 26 million students participate in a DARE course (DARE, 2009). The DARE program utilizes uniformed police officers to teach students to make decisions to resist drug use (DARE, 2009). In addition to classes, DARE incorporates interactive education and activities like dances and socials and culminates in a graduation ceremony (DARE, 2009). DARE is very popular among students and parents. A Canadian study showed that 95% of students responded that they enjoyed the knowledge and presentation of the DARE program (RCMP, 2007). DARE is ubiquitous and popular, but is it effective? 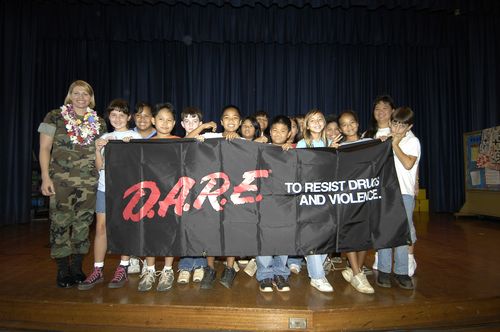 Ringwalt et al. (1991) showed that, although DARE increased students’ awareness and understanding of drugs, it only had a small, not statistically significant, effect on alcohol, tobacco and marijuana use. Similarly, Clayton, et al. (1996) found no differences in the rates of alcohol, tobacco, or marijuana use among DARE graduates one year after the program, or for alcohol, tobacco or marijuana trajectories between students who took DARE and controls at the five-year follow-up. Finally, a ten-year follow-up with the Clayton et al. (1996) sample found no relationship between DARE status and cigarette, alcohol, marijuana, or illicit substance use (Lynam, Zimmerman, Novak, Logan, Martin, Leukefeld & Clayton, 1999). Although proponents of DARE argue that DARE also helps to promote self-esteem and good decision making skills among graduates, Clayton et al. (1996), found only a modest effect on self-esteem and no effect on decision making immediately after course administration. At ten-year follow-up, Lynam et al. (1999) found no effect on self-esteem and a decrease in self-esteem among students who completed DARE.

Why is DARE still being taught?

DARE continues to be widely administered, despite the preponderance of evidence against the program. Why do school officials continue to offer DARE? Birkeland, Murphy-Graham and Weiss (2005) conducted more than 100 interviews with teachers, administrators, and police officers determining why DARE continues to be administered in the face of overwhelming negative evidence. Birkeland et al. (2005) found three main arguments for the continuation of DARE programs: popularity, unrealistic expectations, and secondary benefits.

The Future of DARE?

DARE has sought to change its curriculum and created new programs to address criticisms about its lack of efficacy. During 1999, for example, DARE received private funding to create a new program, Take Charge of Your Life. Sloboda et al. (2009) evaluated the effectiveness of this new program. The study found that students who participated in Take Charge reported higher 30-day alcohol and cigarette consumption, and binge drinking rates compared to those who did not.

Other authors have suggested replacing one-size-fits-all programs such as DARE with more targeted interventions. Midford (2009) noted that focusing limited resources on harm prevention for troubled students is more beneficial than focusing on prevention for all students.

DARE has survived for more than 30 years and remains popular, despite overwhelming evidence against its efficacy as a drug prevention program. Many teachers and administrators see merit in the program, citing unseen benefits. Whereas DARE might never be the solution to youth substance use, DARE will likely continue to be offered to students as a piece of the overall effort to reduce youth drug use. Should DARE continue in its present form? Please let us know your opinion.

Posted at 02:45 PM in Addiction & the Humanities | Permalink

I recall being involved with the initial onset of the DARE program in our school district in the early 80's as our LIONS group hosted a poster contest for middle school students. I am surprised that research claims no statistical evidence of it's efficacy. My take on this, is that this program represents a piece of the pie to help curb drug abuse. If it saves one life, it's efficacious! This is not to say that something else can't be added though.

Well, the thought for these administrators might then be...
Might we find or develop an enjoyable and popular prevention initiative, which uses law enforcement officers, and is also effective?

My take on this, is that this program represents a piece of the pie to help curb drug abuse. If it saves one life, it's efficacious! This is not to say that something else can't be added though.

I think the Idea of DARE is fantastic but the core of addiction is not a problem of awareness of what drugs may or may do If it was The DARE program would cure the problem.
I know our communities want to do something
After reading the article I thought what about a BIBLE program and see the out come of drug use.

We have taken God the Bible out of schools and replaced it with other ideas that are not near as old or as effective as Prayer can be.

We have to abide by laws and rules that has made BIBLE and prayer against the Law...
what about illegal drugs??