« The WAGER, Vol. 16(11) – Slots and shots: Drinking patterns of pathological gamblers before, during, and after treatment | Main | ASHES, Vol. 8(1): Who’s winning at quitting? A state-by-state look at smoking cessation quitlines »

Research shows that the emergency room (ER) might be an important location for mental health screening and intervention, particularly drug and alcohol screening (Fleming et al., 2007). However, most ERs have limited time and resources to conduct such interventions. This week, the DRAM reviews a study examining the implementation and efficacy of an ER-based screening and brief intervention for young adults delivered through text messaging (Suffoletto, Callaway, Kristan, Kraemer, & Clark, 2011).

Figure 1. Change in drinks per day and heavy drinking days from baseline to 12-week follow-up (adapted from Suffoletto et al., 2011). 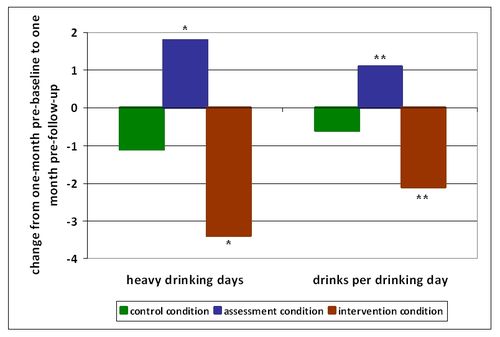