« ASHES, Vol. 8(3) – One at a time: The relative roles of physical and cognitive effects on the process of smoking cessation among teenagers | Main | STASH, Vol. 8(3) – Compounding the wounds of war: High-risk opioid pain treatment among veterans with mental health issues »

Addiction & the Humanities, Vol. 8(3) - Has anyone seen Molly? Club music and ecstasy

Celebrity DJ, Deadmau5 recently called out Madonna through Twitter for alluding to ecstasy during a music festival. The DJ contended that Madonna irresponsibly promoted ecstasy use by asking the crowd how many of them had “seen Molly” – a slang term for ecstasy. This incident made headlines around the world and strengthened the perceived association between club music and ecstasy. This week, Addiction & the Humanities reviews a study that examined the potential connection between music preferences and drug use behavior among visitors to European dance, club, and rock musical events (Van Havere, Vanderplasschen, Lammertyn, Broekaert, & Bellis, 2011). 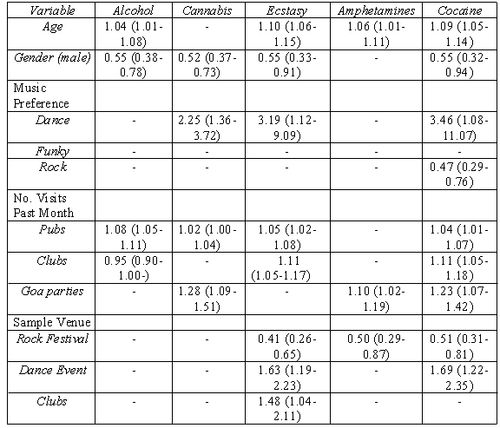 There is an ongoing public perception that certain types of music are more strongly associated with specific drug use. Van Havere and her colleagues suggest that some music preferences might be markers for certain types of drug use. Importantly, this study does not establish that listening to certain types of music cause people to begin using drugs; however, music preference might be a useful marker of risk for drug use. The identification of such markers is important to drug use prevention efforts, and therefore, more research in this area is warranted.

What do you think? Please use the comment link below to provide feedback.

Posted at 11:10 AM in Addiction & the Humanities | Permalink