ASHES, Vol. 8(3) – One at a time: The relative roles of physical and cognitive effects on the process of smoking cessation among teenagers

The path to smoking cessation can take many different forms for different people. The research, however, tends to focus on only one outcome: complete cessation. This is at the expense of other intermediate outcomes, such as short-term abstinence and smoking reduction. Understanding these other outcomes is useful, as it provides a more nuanced and realistic view on how people actually work to quit smoking. Today’s ASHES reviews a study exploring the effects of various physical and cognitive factors on three different cessation-related outcomes (Schuck, Otten, Engels & Kleinjan, 2011)

Table 1: Summary of associations between predictors on outcomes. 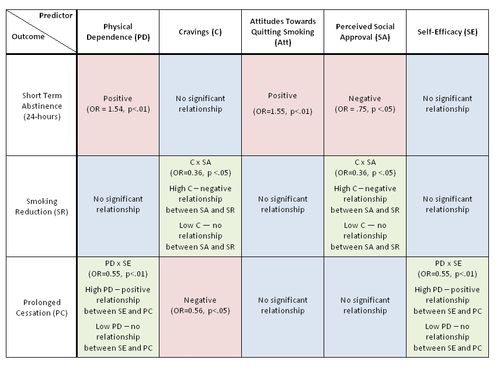 The results show that different factors successfully predicted different smoking cessation-related outcomes. Smoking-related cognitions (e.g., social approval, pros vs. cons of quitting etc.) are useful in predicting short-term abstinence, but physical symptoms (e.g., craving) were more useful for smoking reduction and long-term cessation.  The authors hypothesize that this is because cognitions are closely linked to motivation to change behavior, allowing smokers to overcome a short period of abstinence. As the period of abstinence grows longer, physical influences become more important, and become more predictive of long-term success. Studies like this are useful for looking at how various predictors influence different components of quit behavior, instead of looking at only one outcome. This can be used in the future to develop better and more tailored interventions for smokers.