« The WAGER, Vol. 17(2) –Do impulsive kids make problem gamblers? | Main | ASHES, Vol. 8(3) – One at a time: The relative roles of physical and cognitive effects on the process of smoking cessation among teenagers »

Table 1: Time in Years between Pre-Dependence Alcohol Use Milestones and Alcohol Dependence 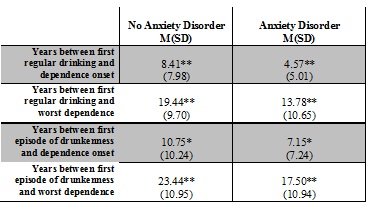 Conclusions
The researchers found that anxiety-disordered individuals transitioned more quickly from regular drinking and first drunken episode to being dependent on alcohol than individuals who did not have anxiety disorders. Neurobiological theories of alcohol dependence suggest that it results from decreasing release of dopamine over extended periods of alcohol use (Koob & LeMoal, 2008). People who have anxiety disorders might be particularly vulnerable to this cycle, because their dopamine-stress response already is dysregulated, effectively giving them a “head start” in developing symptoms of dependence. This dysregulation might explain why fewer instances of interaction with alcohol are associated with risk for dependence among those who have experienced anxiety disorders.

Posted at 02:03 PM in The Drinking Report for Addiction Medicine (DRAM) | Permalink