« Op-Ed/Editorials: List of selected recipients for April giveaway | Main | STASH, Vol. 8(4) – Does the approach bias predict escalation of cannabis use? »

Addiction & the Humanities, Vol. 8(4) - Watch what you drink: How alcohol placement in movies affects adolescent drinking

Unlike the tough stance the movie industry has on smoking, the portrayal of alcohol use in movies is all but unrestricted. Moreover, during recent years alcohol use has played a role as a central plot device in movies such as The Hangover. Although research has shown that alcohol marketing (Gordon, MacKintosh, & Moodie, 2010), peer alcohol use (Ferguson & Meehan, 2011), and possession of alcohol-branded items (Fisher, Miles, Austin et al., 2007) are associated with onset of alcohol use, it is unclear how strongly movie viewing habits factor into a youth’s risk matrix for early onset drinking - especially when compared to other risk factors. This week’s BASIS examines how well- known risk factors, together with movie viewing habits, relate to teen drinking (Stoolmiller, Wills, McClure et al., 2012). 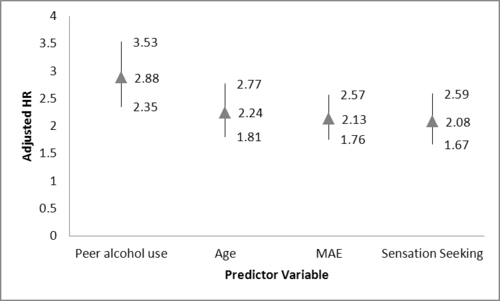 *The number by each marker indicates adjusted hazard rate and the values above and below represent the 95% confidence interval.

Of the variables tested, peer alcohol use, age, and movie alcohol exposure were all statistically significant in predicting the onset of alcohol use and the transition to binge drinking. This is consistent with another recent multivariate study (Hanewinkel, Sargent, Poelen et al., 2012).

Not surprisingly, the strongest predictor for both outcomes in this study was high peer alcohol use. Teens were almost 3 times more likely to start drinking and binge drinking when their friends also drank. Movie alcohol exposure also was a strong marker for the onset of drinking; however, it had a much smaller effect on binge drinking. Additionally, although race/ethnicity did not predict the onset of drinking, Caucasian teens were more likely to progress to binge drinking.

Even after controlling for various possible confounders, movie alcohol exposure still emerged as a strong predictor of alcohol use. This suggests that future studies should examine whether MAE rules can contribute to reducing underage drinking.

[i] (Stage 1) Random digit dial telephone survey, of 377,850 randomly generated numbers, 129,002 were valid home numbers. (Stage 2) Identification of households with age-eligible children, of the 69,516 households that completed screeners, 9,849 households had eligible children (age range 10-14). (Stage 3) Enrollment of children into the study, parental consent was obtained from 7,492 households; teen assent was given in 6,522 of those households.

[ii] Movie alcohol exposure (MAE): The researchers compiled a list of 532 movies that were popular within the 5 years preceding the start of the study (based on box office gross). Trained coders rated the movies for number of seconds of on-screen alcohol use. Researchers asked teens to indicate which movies of 50 randomly selected from the 532 they had watched. Based on their report, researchers calculated MAE for each teen by summing the total seconds of on-screen alcohol use.

Posted at 05:07 PM in Addiction & the Humanities | Permalink

i know a 23 year old male and his 5 friends have a group text and it was called the "Hangover"
i get the vibes drinking excessively is Cool Like in the Movie.