Addiction & the Humanities, Vol. 8(5) – Sex, Drugs, and Rock ’n’ Roll: The portrayal of substance use in popular music

In the last issue of Addiction & the Humanities, we looked at the presence of alcohol in movies, and its relationship to teen drinking (Humanities 8(4)). In contrast to the episodic nature of movie going, music listening can occur during any part of a teenager’s day – and this can add up to much larger exposure to substance use imagery. Today’s Addiction & the Humanities looks at a study that examined references to alcohol, tobacco, and other drugs in popular music (Primack, Dalton, Carroll et al., 2008).

Researchers collected data from Billboard magazine’s lists of popular song titles (based on airplay during 2005) and omitted charts that were not relevant to youth listening (Such as the “Adult Top 40”). 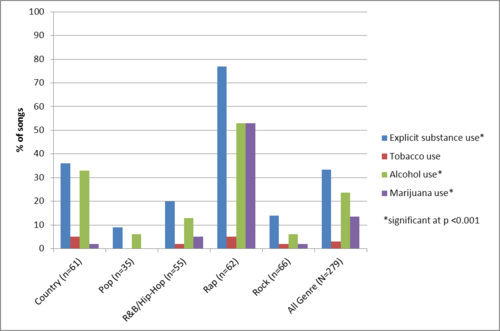 This study finds that about a third of the most popular music in the U.S. includes references to substance use. When dividing the songs up by genre, explicit substance use appears most frequently in rap music and least frequently in pop music. Because adolescents have differing tastes in music, this suggests that an individual might experience more or fewer references to substance based not only on how much music they listen to, but also by their taste in music.

Rather than focusing solely on negative physical and legal consequences of substance use, health education could consider debunking the positive outcomes referred to in music (i.e. sexual and financial motivations). Additionally, programs could focus on teaching students how to complete critical analyses of various media to which they frequently are exposed.

Although the study gives a comprehensive overview of substance use references in popular music, it does not explore the effects of this exposure on adolescents. Future work should focus on the relationship between adolescent music exposure and substance abuse.

Posted at 05:06 PM in Addiction & the Humanities | Permalink

Drug use in popular music scene is becoming a menace. something should be done