STASH, Vol. 8(5) - Coping and co-morbidity: Patterns of substance use among people with mental health conditions

Substance use disorders often co-occur with mental health conditions, such as depression and psychosis (Kessler, Chiu, Demler, & Walters, 2005).  Increasingly, health care providers are developing integrated treatment plans to promote recovery from both substance use disorders (SUD) and mental health (MH) conditions. To facilitate this goal, some researchers have begun to examine reasons for use of particular substances among people with different MH conditions. This week’s STASH reviews one such study (Thornton et al., 2012).

Table 1: Percent of patients endorsing each motive for substance use, separately by diagnosis and substance type, after controlling for age and gender. (Adapted from Thornton et al., 2012). 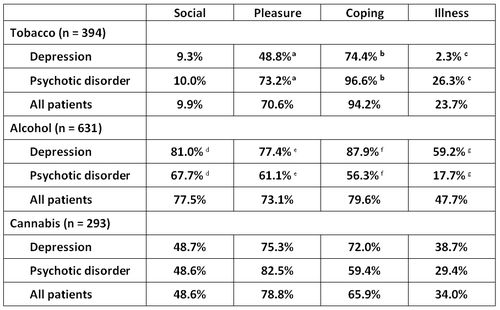 Overall, this work is consistent with the self-medication hypothesis of substance abuse, which states that people use substances in part to relieve psychological suffering (Khantzian, 1997).  This new study suggests that people with depression and psychotic disorders differ in their reasons for using tobacco and alcohol. Compared to people with depression, participants with psychotic disorder were particularly likely to turn to tobacco to help them cope with their mental illness. Therefore, smoking cessation programs among this population will likely fail unless they provide an alternative method of coping with mental illness. On the other hand, people with depression were especially likely to drink alcohol to cope with their illness and for other reasons. Among those coping with depression, the perceived power of alcohol to relieve distress, provide pleasure, and facilitate social interactions will likely impede the success of alcohol treatment. At the prevention stage, it might be worthwhile to provide information about alternative coping strategies to people who are at risk for MH conditions.

Khantzian, E. J. (1997). The self-medication hypothesis of substance use disorders: A reconsideration and recent applications. Harvard Review of Psychiatry, 4(5), 231-244.

1.    Participants who reported never using, or almost never using, a particular substance for a particular reason received a “no” code for that reason.
2.    During this re-coding process, independent coders reached consensus (i.e., 4 out of 5 raters agreed) for 72% of items.