STASH, Vol. 8(6) - Something to cry about: Harsh physical punishment and future risk for drug and alcohol use disorders

Children who experience corporal punishment are at higher risk for later aggression, delinquency, and overall poor mental health, including substance abuse/dependence (e.g., Gershoff, 2002; MacMillan, Boyle, Wong, Duku, Fleming & Walsh, 1999). However, due to measurement issues, it is unclear whether these associations are found outside the context of extreme childhood maltreatment (Baumrind, Larzelere, & Cowan, 2002). This week’s STASH reviews a nationally representative survey investigating the associations between childhood physical punishment in the absence of extreme maltreatment and a range of adult mental health conditions, including drug and alcohol use disorders (Afifi, Mota, Dasiewicz, MacMillan & Sareen, 2012). 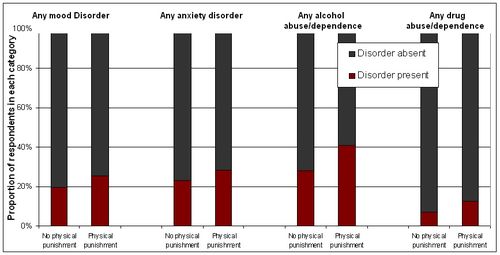 This study demonstrated that harsh physical punishment experienced as a child, even in the absence of extreme maltreatment, is associated with alcohol and drug dependence/abuse later in life, as well as other mental health conditions. These findings inform parents as well as health care providers who give recommendation to parents about physical punishment. Future studies are necessary to examine the prospective association between physical punishment and these conditions, including potential underlying mechanisms such as chronic stress and the often-resulting physiological and emotional dysregulation that can result from such stress. While interpreting these results, the reader should take note that this study examined physical punishment that includes physical force more harsh than “customary” physical punishment (i.e., spanking).

1 Family dysfunction is defined as whether a parent or other adult in the household had 1 or more of the following: (1) had a problem with alcohol or drugs; (2) went to jail or prison; (3) was treated or hospitalized for a mental illness; (4) attempted suicide; and/or (5) died by suicide.

2 The numbers do not sum up into the overall sample size, because they include only responders to the specific questions and exclude those who experienced severe physical, sexual or emotional childhood maltreatment.

Posted at 09:11 AM in Science Threads on Addiction, Substance Use, and Health (STASH) | Permalink

I do not understand these conclusions. If I read this correctly, the researchers conclude children who were spanked "sometimes" were at higher risk for substance abuse than children who were never spanked. Hoever your article says the people who were answering the survey weren't asked about "punishment" but only acts of physical aggression towards them. So why then does the opening sentence make a conclusion about "punishment". I don't see where this is warranted. I think this is an interesting research question and I look forward to more accurate research about it.

Thank you for your interest in this post. The authors framed the article as investigating physical punishment. However, I agree with you that the actual question asked was not about punishment, but rather about any "hitting". Some people may interpret "hit" as simple spanking, whereas other people may interpet it as severe physical aggression not necessary related to punishment. In any case, the wording is not clear. Therefore, we added the first limitation and encourage to interpret the results with caution.