STASH, Vol. 8(7) - In the moment: Proximal antecedents of marijuana use

The Addiction Syndrome (Shaffer, LaPlante, & Nelson, 2012a; Shaffer et al., 2012b) model suggests that addictive behavior develops, in part, over time as a consequence of specific distal and proximal antecedents -- factors that create longer-term and shorter-term risk, respectively. Although researchers have given a great deal of scientific attention to longer-term risk factors, they have paid less attention to the proximal antecedents of addictive behavior (Najavits, 2012). This week’s STASH reviews analyses of ecological momentary assessments from marijuana users to identify common proximal events for marijuana use (Buckner, Crosby, Silgado, Wonderlich, & Schmidt, 2012).

Figure 1: Momentary relationships between craving and anxiety, and marijuana use 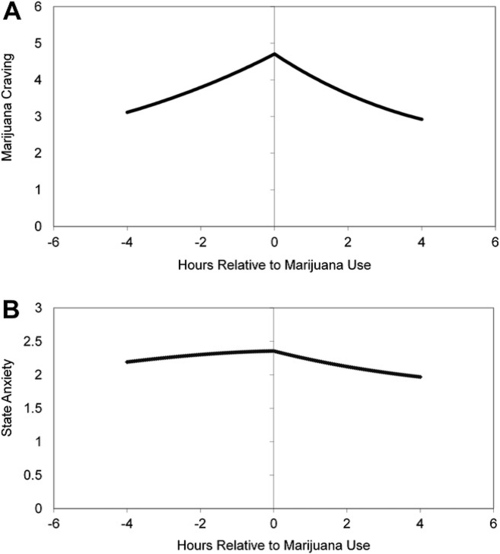 Few studies have examined real-time precipitants of addictive behavior, so this study advances what we know about in-the-moment initiation of risky behavior. Specifically, this study suggests that craving and social situations elevate the risk for marijuana initiation among recent marijuana users. Contrary to popular opinion, marijuana use had a weak momentary relationship with anxiety. To advance the study of proximal antecedents, researchers should consider expanding the diversity of factors related to smoking marijuana, and look at the specificity of these factors for marijuana use. It is unclear whether the factors are specific to marijuana use or something more general.