The DRAM, Vol. 8(8) - When is a binge a binge? College students’ understanding of binge drinking

Figure 1 - Mean number of drinks participants thought comprised binge drinking based on types of alcohol, their past two week binge status, and their gender (adapted from Bonar et al., 2012). 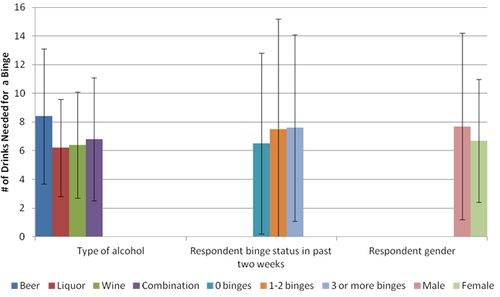 This study highlights the importance of considering student perceptions when attempting to design effective alcohol education and prevention programs in colleges. For example, some students incorrectly assumed that more beers were required for a binge than other alcohol types, suggesting the importance of educating college students about the equivalencies of different types of alcohol and about the alcohol content in each standard drink. Participants in this sample also highlighted drinking motivation as an important component of binge drinking. Though researchers’ definitions of binge drinking do not include motivation, students are correct to highlight its importance. For example, people who drink to cope with emotional problems tend to have more drinking problems than their counterparts absent such motivation. Therefore, prevention programs might be well-served by addressing the negative motivations for drinking among students and providing alternate coping mechanisms.

Posted at 02:43 PM in The Drinking Report for Addiction Medicine (DRAM) | Permalink