STASH, Vol. 8(9) - It’s ten o’clock, do you know where your children’s friends’ parents are? Downstream effects of parenting style on adolescent substance use

Research has established that both peer groups and parenting styles shape adolescents’ substance use. Adolescents are more likely to use drugs if their friends use drugs and if their parents are relatively neglectful (Steinberg, 2001). However, few studies have examined the influence of parents of friends on adolescents’ behavior. In this week’s STASH, we review a study that examined the extent to which adolescents are influenced by their friends’ parents’ behavior (Shakya, Christakis & Fowler, 2012). 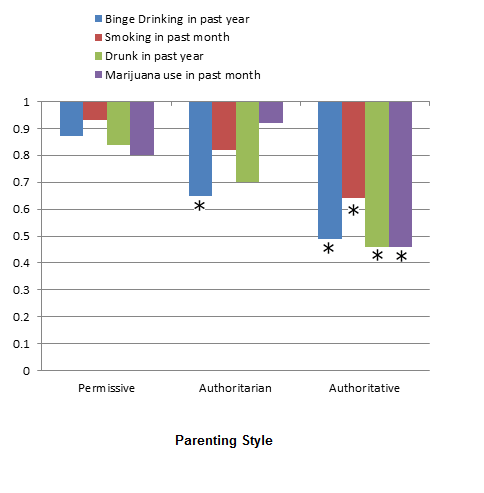 a This is a bivariate association
* Indicates statistically significant odds ratio

The results of this study suggest that social network influences, particularly those pertaining to substance use, may extend beyond peer-peer or child-parent relationships. This study confirmed and extended previous work which found authoritative parenting to be a positive influence on adolescents, suggesting that this parenting style might influence not only parents’ own children but also their peers.   More research needs to be done on the timing and directionality of this influence.

† = This effect was found while controlling for the parenting style of the adolescent's own mother, school-level fixed effects, and demographics.

Posted at 02:03 PM in Science Threads on Addiction, Substance Use, and Health (STASH) | Permalink