The DRAM, Vol. 8(9) – The skinny on bariatric procedures and alcohol use disorder

Bariatric surgery is often proposed as a treatment for severe obesity. More than 200,000 such procedures are performed in the United States each year (Elliott, 2012). Some bariatric procedure patients notice an increased sensitivity to alcohol after surgery, potentially because the procedure causes alcohol to be absorbed faster (Klockhoff, Naslund and Jones, 2002). In this issue of the DRAM, we review a study that investigates a possible link between bariatric surgery and alcohol use disorder (King et al., 2012).

Figure 1: AUD Prevalence before, 1 year after, and 2 years after bariatric procedure. 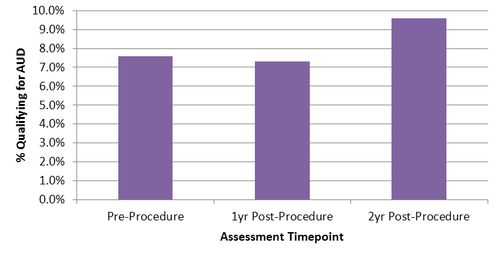 Note. Percents are based on the 1,389 participants who responded to the relevant questions on the AUDIT at all three time periods (before procedure, one year after procedure, and two years after procedure).
2yr Post-procedure prevalence significantly different than other two time points, p < .01.

This study investigated alcohol use disorder rates in bariatric surgery patients both before and after surgery. One important finding was that the prevalence of AUD two years after surgery was greater than the prevalence rate one year after surgery. Future studies should continue to investigate the longer-term effects of bariatric surgery. Clearly, not all patients who undergo bariatric procedures go on to develop AUD; future research should also examine factors that increase or decrease risk among this population.

Posted at 04:58 PM in The Drinking Report for Addiction Medicine (DRAM) | Permalink