« Op-Ed/Editorials: List of selected recipients for September giveaway | Main | The DRAM, Vol. 8(9) – The skinny on bariatric procedures and alcohol use disorder »

Previous research suggests that many people who seek treatment for gambling problems report developing their problems while playing slot machines. Therefore, researchers have been seeking ways to make slot machine gambling safer, including encouraging players to set and keep a firm limit on expenditure. While many players understand the importance of preset limits, many have trouble adhering to them (Wohl, Christie, Matheson, & Anisman, 2010). This may be due a psychological phenomenon known as dissociation, where a person is so engaged in an activity that they lose track of their surroundings. Today’s WAGER reviews a study that examines whether pop-up messages help people follow their preset monetary limits, and whether they do so by interrupting dissociation  (Stewart & Wohl, 2012). 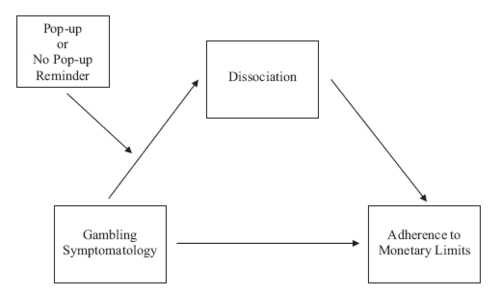 This study showed that pop-up messages on slot machine terminals can be an effective way to increase user adherence to preset monetary limits. In the control condition, participants with gambling problems dissociated more, which made them less likely to stick to their limits; this relationship did not hold in the pop-up condition, suggesting it interrupted the process of dissociation for those with problems. However, in both conditions, participants with higher levels of gambling problems were still more likely to ignore their limits than participants with fewer symptoms. This suggests that pop-up limit messages might be an effective tool for reducing harms associated with gambling, but might not be effective for people with high levels of problems.

Posted at 12:43 PM in The Worldwide Addiction Gambling Education Report (The WAGER) | Permalink

I'm a recovering compulsive gambler (8+ years). Upon reviewing the above article, I would question the validity of this research. (1) The participants are college students and from my experience I've never seen a compulsive gambler still in college, which tells me that they are either not CG's or they are in the very early stages of this potential addiction. You don't state what test was used to determine problem gambling and pathological gambling. (2) I would not expect a CG to set a limit based upon a minimal amount of money at risk ($ 20). Given the option, I would've bet the whole $20. (3) The pop-up would've been an anoyance to me and I wouldn't play a slot machine that would interrupt me, unless it was the only type available and I was forced to use it. (3) I agree with the dissociation idea, but it wouldn't be with the immediate surroundings, it would be dissociation from life. Compulsive gambling from my experience and those I know, has more to do with "escaping" from life and themselves. (4) Pop-ups may be benefical in the very, very early stages of someone's gambling, but as it progresses, the limits disappear almost entirely until the money temporarily runs out. (5) I continuously hear/read articles that appear to makeout the pathological gambler as a money monger. This is far from reality. In the early onset it is but it then quickly progresses to a high, followed by total despair/hopelessness which feeds the addiction even more. Any wins are merely a high to allow the person to continue the vicious circle.

Thanks for the opportunity to comment. Just a few personal thoughts is all . ..

An interesting and well thought out study, However....

Time has shown that with a problem gambler, well into their learned behaviour, it is very difficult to break the cycle.

Over the last 30 years, working in this area I have noted certain common factors.

Enters the premises with fixed amount available to spend will more often than not have what is termed as a "Cunning Kick"with extra monies hidden on his person, so called "unavailable for gambling". If and when he/she depletes their allocated cash, will then dip into their safe stash and continue gambling until every last penny has disappeared.

Before the existence of ATM cash machines on the gambling premises, the client would visit an external cash machine, sometimes many kilometres from the venue, withdraw a set amount then proceed to his/her gambling destination. On losing all money available, would then proceed back to the external ATM over some distance and make a second withdrawal, return immediately to the venue enabling a continuation of gambling.

An event that is not so common but does occur, is the reluctance to visit the bathroom during a session, winning or losing, which can lead to an uncomfortable and embarrassing event happening.

Another intrusion into their mindset is other events run by a club to entertain patrons.
Certain lineups within the poker machine window would win whatever prize but the player would have to sit and wait for the staff member to come and verify the correct outcome. The problem gambler would more often than not be prepared to forgo the small prize by not waiting and just continue playing. This type of added entertainment has mainly been discontinued by the establishments because they recognised the disruption was unsuccessful with a number of big players.

With the advent of warning signs, clocks within sight, and all the advertising currently in train, the problem gambler issue is increasing throughout society not decreasing. The gambling venue's income and profit is not declining.

Discussions with government, NGO's, welfare organisations, problem gambling counselors and other interested parties are ongoing, at the moment discussing preset amounts being locked in.

I feel community education with whole families and all of society would probably achieve an equally successful result.

On the whole, all these manufactured forced stoppages and interruptions are having a minimal effect on the problem gambler.

As often stated, addiction is a pleasure driven activity with a cost that is far to high to pay.
Somehow, we need to focus on minimising the pleasure factor in all addictions...

The key is that the gamblers were required to set a limit. How it is enforced is secondary.