The DRAM, Vol. 8(10) - The more you drink, the more you (think you can) drive? The effects of objective and subjective intoxication on DUI behavior in college students

The majority of research on predictors of DUI behavior focuses on individual-level factors, such as personality, sensation seeking, and comorbid psychiatric disorders (Nelson & Tao, 2012). This research, however, does not take into account event-specific factors that occur immediately before DUI behavior. This week’s DRAM reviews a study that investigates some of these situational factors. In this study, Quinn and Fromme (2012) examine how objective intoxication (i.e., BAC), and subjective intoxication affect the probability of DUI behavior among a sample of college students. In particular, researchers were interested in whether the disinhibiting effects of alcohol increased the probability of DUI behavior.

Figure 1: Effect of estimated BAC and subjective intoxication on probability of DUI (Reproduced with permission from Quinn & Fromme, 2012). 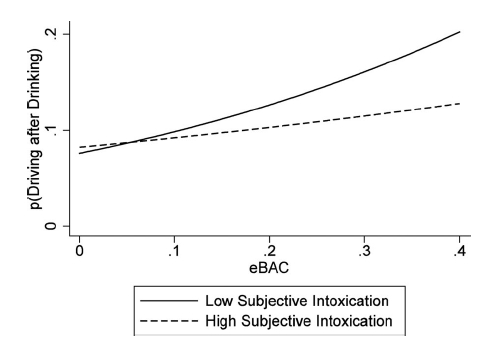 This study represents an advance in our understanding the complicated decision making process behind DUI behavior. More generally, this study underscores the notion that not just individual-level factors, but also situational factors also contribute to DUI behavior. The probability of DUI behavior increased with estimated BAC. This effect was more pronounced for those who did not think they were intoxicated. Previous research suggests that alcohol impairs decision making processes, so that only the most salient or obvious cues are processed while intoxicated (Casbon, Curtin, Lang, & Patrick, 2003). For participants who feel drunk, this high subjective intoxication is a highly salient sign that tells them they should not be driving (Moss & Albery, 2009). However, for people who do not feel as drunk, this internal “warning system” might be silent and easily overridden by the impulse or desire to drive. The next step in this line of research is to further investigate factors that contribute to or reduce subjective intoxication among people with elevated BACs.

Hello there, You have done an incredible job. I will definitely digg it and personally suggest to my friends. I am sure they will benefit from this web site.