« The DRAM, Vol. 8(11) – What do you think when you drink? The relationship between implicit associations, explicit expectations, and drinking behavior | Main | STASH, Vol. 9(1) - Not so different after all? Sex-specific patterns of psychiatric comorbidity among men and women with SUD » 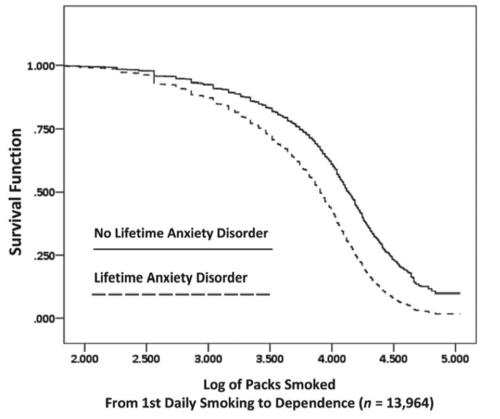 Kusher, M.G., Menary, K.R., Maurer, E.W., Thuras, P. (2012). Greater elevation in risk for nicotine dependence per pack of cigarettes smoked among those with an anxiety disorder. Journal of Studies on Alcohol and Drugs, 73, 920-924.

[1] First cigarette smoked was also used as an outcome measure, but will not be discussed in this review.

[2] The endpoint for participants that did not develop nicotine dependence was the date of the NESARC survey.

Is all addictions, without exception, anxiety and depression play a very important role. I made it very clear in my book titled gambling addiction handbook.
Sincerely,
Yair