STASH, Vol. 9(1) - Not so different after all? Sex-specific patterns of psychiatric comorbidity among men and women with SUD

People who experience substance-use disorders (SUD) also tend to experience a range of comorbid psychiatric conditions (e.g., Kessler et al., 1997). Some evidence suggests that the profile of comorbid conditions differs for men and women with SUD (e.g., Kessler et al., 1997). However, past estimates of sex-specific comorbid associations have not been adjusted for sociodemographic characteristics and the presence of other co-occurring psychiatric conditions. This week’s STASH reviews a study that examines sex-specific comorbid associations with SUD while controlling for these additional variables (Goldstein, Dawson, Chou, & Grant, 2012).

Figure 1: Odds ratios (95% confidence intervals) for selected associations between drug use disorders and other psychiatric disorders among NESARC respondents, as a function of sex. Adapted from Goldstein et al. (2012). 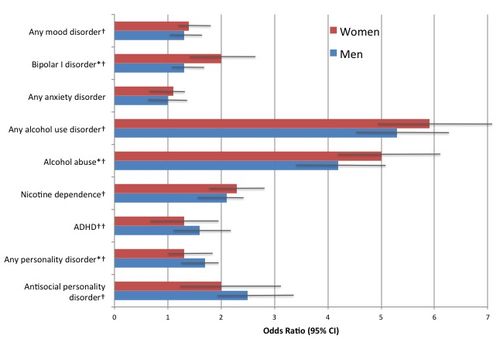 Goldstein, R. B., Dawson, D. A., Chou, S. P., & Grant, B. F. (2012). Sex differences in prevalence and comorbidity of alcohol and drug use disorders: results from wave 2 of the national epidemiologic survey on alcohol and related conditions. Journal of Studies on Alcohol and Drugs, 73(6), 938-950.

1 The researchers performed the same set of analyses for alcohol use disorders, but we are not reporting those results here.

2 For example, the fully adjusted model exploring comorbidity between drug abuse and social phobia adjusted for sociodemographic characteristics plus any mood disorder, any anxiety disorder except social phobia, any alcohol use disorder, nicotine dependence, ADHD, and any personality disorder.