The DRAM, Vol. 9(1) - Attempted suicide and alcohol use disorder in the elderly

Many studies have investigated comorbidity between substance use disorders and other mental health issues. In particular, some researchers have studied possible associations between alcohol use disorder (AUD) and attempted and completed suicide in various populations (Conwell et al, 2000; Chiu et al., 2004). This week’s BASIS reviews a study that investigates this association in an elderly population in Western Sweden (Morin et al., 2012).

Figure 1: Number of people with and without alcohol use disorder, patients versus comparison participants (Morin et al., 2012) 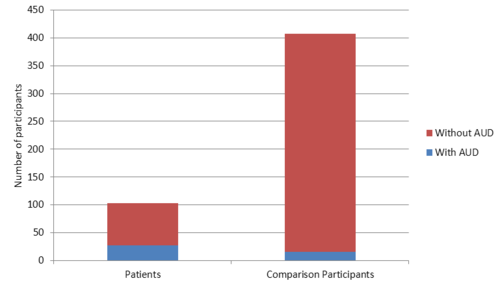 The results of this study suggest that within the elderly population, those with AUD are significantly more at risk for attempting suicide than those without AUD. Future studies will be necessary to determine the directions or mechanisms of causality between AUD and suicidal tendencies. Based on just the association, however, the authors recommend that clinicians who work with elderly patients evaluate these patients for alcohol use, depressive symptoms and suicidal feelings. Evidence of one of these risk factors (e.g., AUD) ought to lead to further screening for the others (e.g., depressive symptoms or suicidal feelings).

[1] The researchers used a broad definition of AUD in accordance with DSM-IV. It included cases with social complications of problematic alcohol use, cases with physiological dependency, and cases with multiple admissions for detox treatment. Interviewees could be classified as having lifetime AUD based on either interviews or medical records.

Posted at 01:59 PM in The Drinking Report for Addiction Medicine (DRAM) | Permalink