« The DRAM, Vol. 9(2) – Drinking just to fit in? The effect of drinking norms and perceived social support on alcohol consumption in college students. | Main | Special Topics in Addiction and the Humanities: From scare tactics to realism: Different approaches to the portrayal of methamphetamine »

The dangers of second-hand smoke are well established. To protect nonsmokers from exposure to second-hand smoke and to encourage smokers to quit, states and municipalities have implemented a variety of policies prohibiting smoking in public buildings and open spaces, businesses, and even apartment buildings. This week’s ASHES reviews a meta-analysis of studies examining trends in cardiovascular and respiratory disease risk before and after implementation of smoke-free laws (Tan & Glantz, 2012).

Figure 1. Relative risk of hospital admissions for disease categories after implementation of smoke-free law compared with before implementation. (Adapted from Tan and Glantz, 2012). 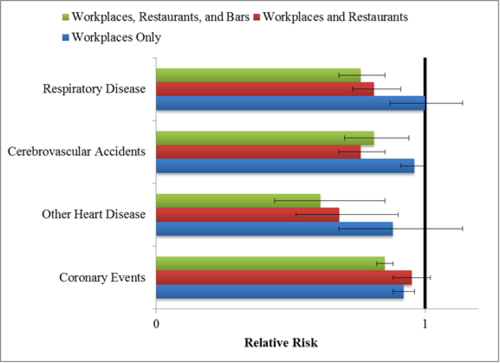 This study supports the findings of previous research and further clarifies the relationship between smoke free laws and related health outcomes. Specifically, in addition to associations between smoke-free laws and lower risk of related health outcomes, researchers also found a dose-response relationship between the comprehensiveness of the law and that risk. Interpreted in light of other pieces of evidence (e.g., known biological pathways by which tobacco smoke exposure causes disease) these findings suggest a causal link between smoke-free laws and reduced risk of disease and provide a strong evidence-base for policy decisions.