« Special Topics in Addiction and the Humanities: From scare tactics to realism: Different approaches to the portrayal of methamphetamine | Main | The WAGER, Vol. 18(3) – Three roads to pain: Testing the pathways model for problem gambling »

Ketamine (street name “Special K”) is an anesthetic drug that some people use recreationally at sub- anesthetic doses to induce a dissociative state. Notably, some research suggests that intravenous ketamine provides rapid relief from depressive symptoms among people with major depressive disorder (MDD). Ketamine might therefore be a useful option for people who have not responded to traditional anti-depressives (Berman et al. 2000). This week’s STASH reviews meta-analysis describing studies of ketamine for the treatment of MDD and bipolar disorder (BD) (aan het Rot, Zarate Jr., Charney, &  Mathew, 2012). 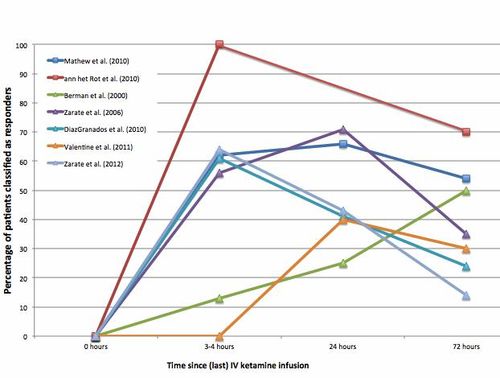 Despite its misuse potential in recreational settings, there seem to be benefits in using ketamine in controlled settings for people who do not respond to anti-depressants. These data suggest fast-acting but somewhat transient effects of IV ketamine; future studies are needed to determine whether ketamine can provide long-lasting effects, potentially using other delivery modes (e.g., oral, intranasal, intramuscular).  Patients varied a great deal in their response to treatment, suggesting the need for additional research on predictors of response. Lastly, researchers are using animal models and brainwave recordings to gather important information on the neurobiological mechanisms underlying ketamine’s effects (e.g., Duman & Aghajanian, 2012).

[1] An instrument designed to assess adequacy of medication trials for major depression by rating them on a scale of 1-5,  now in the form of  a computer-based algorithm (Oquendo, 2003)

[3] A multi-item questionnaire used to provide an indication of depression (Hamilton, 1960).

[4] A ten-item diagnostic questionnaire used to measure severity of depressive episodes in patients with mood disorders. (Montgomery and Asberg, 1979)

Posted at 12:14 PM in Science Threads on Addiction, Substance Use, and Health (STASH) | Permalink