« The DRAM, Vol. 9(3) – Shots and Ladders: A look at drinking games and alcohol consumption | Main | STASH, Vol. 9(4) - Did I or didn’t I? The effect of placebo versus marijuana on impulsivity and risk taking »

ASHES, Vol. 9(3): Sad now? How about now? Influences of mood and motives on teens’ cigarette use

Previous studies have established pathways between depressive symptoms and regular cigarette use in adolescence (Brown, Lewinsohn, Seely & Wagner, 1996). This week’s ASHES reviews an investigation of the influence of negative mood, mood variability, and smoking motives on teenagers’ smoking behavior. The researchers tracked teens’ smoking behavior at baseline and 15 months later to see which mood and motivational factors predicted increases in cigarette use (Weinstein & Mermelstein, 2013). 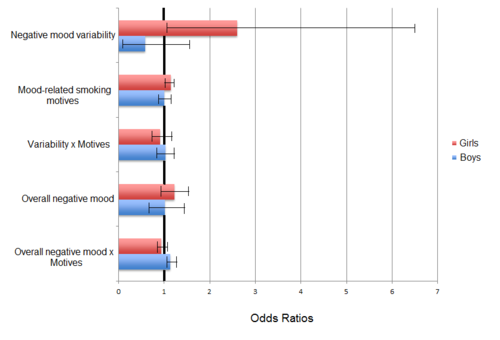 Note. The bold line designates an odds ratio of 1, at which there is no distinguishable difference between groups.”

The study suggests that mood variability is more strongly related to the smoking behavior of girls than boys. It is possible that girls are more likely than boys to use cigarettes to attempt to regulate their mood, which suggests avenues for smoking prevention (e.g., teaching girls better ways to regulate their moods). However, girls in this study also reported higher levels than boys of negative mood and (perhaps consequently) negative mood variability, suggesting that the gender differences might have been a function of better distributed measures among girls than boys. In either case, the findings are suggestive of the importance of associations between emotion (dys)regulation and smoking behavior.

Bradford-Hill, Sir Austin. (1965). The environment and disease: Association or causation? From Proceedings of the Royal Society of Medicine, published in Bulletin of the World Health Organization, 83(10).