« ASHES, Vol. 9(3): Sad now? How about now? Influences of mood and motives on teens’ cigarette use | Main | The WAGER, Vol. 18(4) – The influence of expanded gambling opportunities in Iowa on disordered gambling rates »

STASH, Vol. 9(4) - Did I or didn’t I? The effect of placebo versus marijuana on impulsivity and risk taking

Marijuana use is associated with risky behaviors, such as risky sexual behavior; and some dangerous outcomes, such as motor vehicle accidents (Drummer et al., 2004; Fernandez et al., 2004). However, it is not clear how individuals’ expectations about the experiential effects of marijuana use might play a role in elevated risk taking behavior; expectations in general exert powerful effects on behavior (e.g., Testa et al., 2006). This week’s STASH reviews a study that investigates the separate effects of true marijuana taking and marijuana expectancy on risk behavior and impulsivity (Metrik et al., 2012).

Figure 1. Difference scores (Post-smoking minus baseline) in delayed discounting task  as a function of pharmacology and expectations 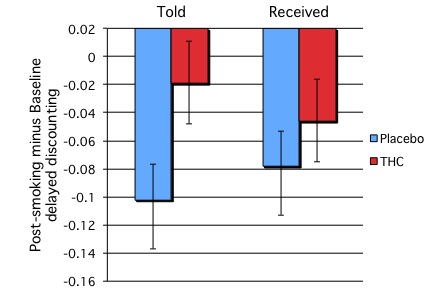 In this study, taking placebo increased subjective feeling of intoxication. This demonstrates that expectancy may play a substantial role in individuals’ perception of the drug effect. Further, expectations influenced some aspects of impulsive behavior, but in a surprising way. Individuals who believed they consumed THC were more cautious in their decisions.  Specifically, they discounted delayed reward less then did those participants who believed they used placebo. This signals a compensatory effect (Bates & Blakely, 1999);  individuals who believe they are under influence of drug might deliberately try to compensate for its potential effects and practice more caution.

Consuming THC did not influence the main impulsivity outcome. This implies that the effect of marijuana on impulsivity is not as strong as the effect of other drugs (Fillmore, 2003). This result, as with all research,  should not be automatically generalized beyond the particular setting and interpreted as a proof of no effect of the drug on impulsivity and risk perception.

[i] For the EDT, we are reporting the results excluding participants who reported suspicions about placebo content.

Posted at 12:23 PM in Science Threads on Addiction, Substance Use, and Health (STASH) | Permalink