During 2002, Blaszczynski and Nower proposed that there are three pathways to problem and pathological gambling. In their first pathway, problem gambling develops as a matter of behavioral conditioning, not as a matter of psychopathology. In their second pathway, factors such as mood disorders,  poor coping skills, and traumatic life events contribute to the production of an “emotionally vulnerable gambler” who gambles to relieve pain (Blaszczynski & Nower, 2002). In their third pathway, emotional vulnerability combines with impulsivity and attention and personality disorders to create many problems, including gambling. Today’s WAGER reports on research (Nower, Martins, Lin, & Blanco, 2012) that searches for symptom clusters corresponding to these three pathways  using data from of the National Epidemiological Survey on Alcohol and Related Conditions.

Figure 1: Probabilities of lifetime anti-social personality disorder, prior-to-past-year abuse or dependence of alcohol or drugs, and prior-to-past-year history of physical fights due to drinking, for each of the three classes. Adapted from Nower et al., 2013. 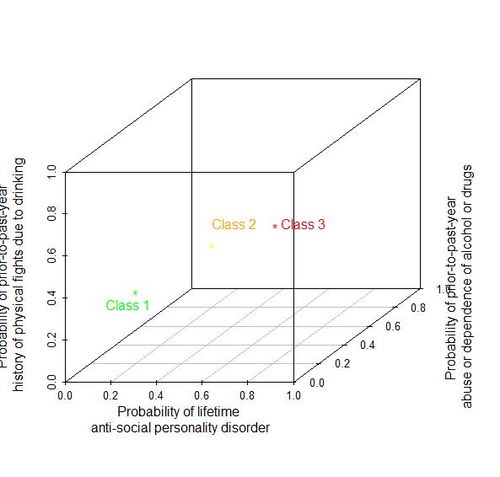 The three classes found in the latent class analysis somewhat correspond to the three pathways outlined in Blaszczynski and Nower’s (2002) earlier work. They represent different levels of complicating factors that can interfere with or obstruct attempts at intervention or treatment for disordered gambling. If clinicians can identify their patients’ pathways, they might be able to adapt or tailor different treatment programs to their own special needs and personalities.

[1] All participants were asked if they had gambled at least five times in any 1 year of their lives. Those who responded affirmatively and then met three or more DSM-IV criteria for pathological gambling were classified as disordered gambling participants.