« The DRAM, Vol. 9(4) – For Airmen returning from conflict, the risk associated with TBI is anything but mild | Main | STASH, Vol. 9(5) – Maybe problems don’t last forever: An alternative view of remission from drug dependence »

In the continuous battle against the negative effects of cigarettes, both on smokers and bystanders, science and technology have given us a number of alternatives to the classic nicotine cigarette, such as the nicotine free, electronic cigarette. However, it is unclear if these alternatives  successfully curb smoking cravings. This week’s ASHES reviews a study by Domino and colleagues (2013) that compared the effects of regular and reduced nicotine cigarettes on self-reported craving and release of striatal dopamine, a neurotransmitter involved in the brain’s reward pathway. 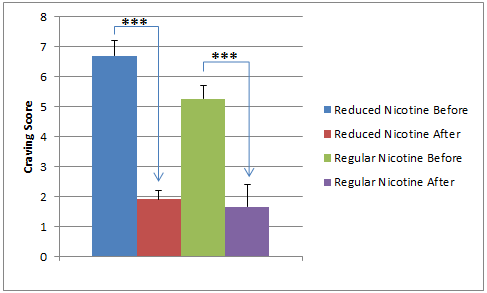 The results of this study support the idea that there is a non-pharmacological (non-nicotine) component to cigarette addiction. The effects on the dopamine reward system were originally thought to be associated with the nicotine released during smoking (as reviewed by Sharma & Brody, 2009). The current study suggests that smoking both regular cigarettes and reduced-nicotine cigarettes reduces self-reported craving and releases striatal dopamine. Further studies are necessary to determine whether these effects translate into smoking cessation and relapse prevention among those who turn to reduced-nicotine or non-nicotine alternatives in order to stop smoking.

Sharma, A., & Brody, A. L. (2009). In vivo brain imaging of human exposure to nicotine and tobacco. Nicotine psychopharmacology, handbook of experimental pharmacology, 192, 145-171.