« The WAGER, Vol. 18(4) – The influence of expanded gambling opportunities in Iowa on disordered gambling rates | Main | ASHES, Vol. 9(4): Curbing Your Craving? Comparing the mood-altering effects of regular and reduced-nicotine cigarettes »

The DRAM, Vol. 9(4) – For Airmen returning from conflict, the risk associated with TBI is anything but mild

Since 2001, the U.S. government has deployed more than 1.6 million military personnel to Afghanistan or Iraq (Tanielian, et al. 2008). Among veterans returning from these conflicts, doctors have observed nearly 200,000 cases of mild-traumatic brain injury (i.e., TBI; Fischer, 2013). Symptoms of mild-TBI include being confused/disoriented or experiencing memory loss for less than 24 hours, losing consciousness for up to thirty minutes, and normal medical imaging results (Fischer, 2013). Left untreated, TBI and other invisible wounds of war can lead to substance use disorders and a variety of psychiatric comorbid disorders (Tanielian, 2008). This week’s DRAM reviews an article that assessed the risk for addiction following a mild-TBI among active-duty military personnel (Miller et al., 2013).

Figure 1. Adjusted Hazard Ratios for Alcohol and Drug Abuse and Dependence Among Active-Duty US Airmen with Mild-TBI compared to Other-Injured Airmen (adapted from Miller et al., 2013) 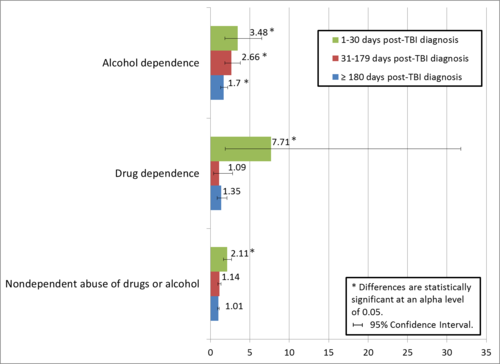 Military personnel who suffer mild traumatic brain injuries are at increased risk for substance abuse and dependence for a variety of substances, mainly in the period immediately following their injury. In particular, alcohol dependence might be a long lasting effect of mild-TBI. It’s possible airmen are abusing substances to cope with the symptoms of mild-TBI or because their injury has made them more susceptible to addiction. Substance misuse might inhibit the healing process and lead to long-term health problems, which could then exacerbate substance use problems. Screening for substance use and abuse following a mild-TBI should be considered for all military personnel at risk for TBI.

Posted at 05:05 PM in The Drinking Report for Addiction Medicine (DRAM) | Permalink