« STASH, Vol. 9(4) - Did I or didn’t I? The effect of placebo versus marijuana on impulsivity and risk taking | Main | The DRAM, Vol. 9(4) – For Airmen returning from conflict, the risk associated with TBI is anything but mild »

The WAGER, Vol. 18(4) – The influence of expanded gambling opportunities in Iowa on disordered gambling rates

The expansion of gambling opportunities raises some important public health issues. Researchers previously thought that expanded gambling opportunities would lead to increased rates of gambling and gambling problems. A growing body of evidence, however, suggests that the relationship between gambling opportunities and gambling problems is more complicated (LaPlante & Shaffer, 2007). Iowa provides a setting to examine this relationship further. Iowa first legalized riverboat casino gambling in 1990, and then land-based casinos in 2005. There are currently 21 casinos in the state, up from just seven in 1994. . Today’s WAGER reviews a study (Black, McCormick, Losch, Shaw, Lutz, & Allen, 2012) exploring trends in gambling and disordered gambling over time in Iowa using data from three cross-sectional studies spanning more than 20 years. 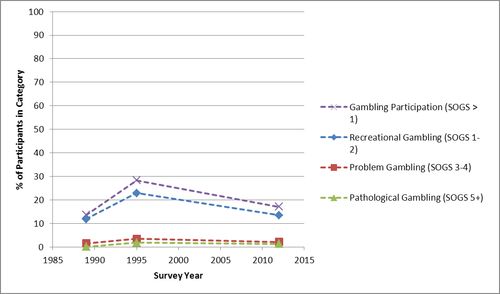 Note: The dotted lines are added for clarity only. They do not indicate the pattern of gambling and gambling problems in between survey years.

Despite continued gambling expansion in Iowa since the legalization of casinos during 1990, there is not a linear increase in gambling participation rates; the percent of residents gambling rose significantly from 1989 to 1995 but dropped significantly from 1995 to 2012. The rates of problem and pathological gambling showed the same pattern. Rates rose significantly between 1989 and 1995, but decreased marginally between 1995 and 2012. . Overall, these results are consistent with an adaptation model proposed by Shaffer (2005) and LaPlante & Shaffer (2007), which suggests that gambling participation and problems increases initially with more exposure but peaks and stabilizes at a lower rate over time. However, true longitudinal research is needed to fully support or dispel this hypothesis. By following one large, representative group of people, we can learn how people react over time to expanded gambling and avoid the ambiguity associated with repeated cross-sectional surveys. For example, a longitudinal design is required to see if the same people have disordered gambling over a period time, or if they recover and others develop problems.

Shaffer, H.J. (2005). From disabling to enabling the public interest: Natural transitions from gambling exposure to adaptation and self-regulation. Addiction, 100, 1227-1230.

[2] A 2011 study in Iowa used the NODS, a different measure of disordered gambling. The results from this study are not directly comparable to the previous studies, which used the SOGS.

Posted at 03:42 PM in The Worldwide Addiction Gambling Education Report (The WAGER) | Permalink

Could the economy affected the results of this study?

I think researchers here make a great point that we really need a longitudinal study to be able to understand this better. At this point, even in Iowa, we really don't have enough data to state for sure that gambling participation increases initially when gambling is a novelty and then decreases. Some data indicate that this may not be the case:

One thing to note is that the gambling participation seems to stay steady and at a higher rate than when gambling is introduced. As gambling becomes more available, it is likely that the trend continues, which is certainly the case throughout the rest of the country.

For a casino operator to make their expected profit in a newer, higher tax market, the games have to have a greater negative expectation to pay the higher taxes. This may lead gamblers to burn out or go broke that much sooner.

Other factors are the growth of so-called "carnival games" like three-card poker (higher house advantage than blackjack or baccarat) and volatility of returns on slot machines. Double Diamond, which has been in use in casinos for 20 years or longer, has a maximum payout of 799:1. Slot machines that pay 5000 coins per coin bet can be found. The growth of so-called penny slots that allow $2.50 a spin or more to be bet and where most of the payout lies in hitting a bonus round, are probably also contributing to the decline in gambling over time.

To answer the other commenter, Pennsylvania had the highest slot revenue in their history in March 2013.