« The DRAM, Vol. 9(5) - A DUI but no diagnosis? How DSM-5 might impact the identification of Alcohol Use Disorders | Main | STASH, Vol. 9(6) - Stages of non-medical prescription opioid use and suicidal ideation and attempts »

ASHES, Vol. 9(5) – Easy to get, but tough to smoke? Relationships among clean air policy, tobacco outlet density, and youth smoking.

Some research has found that young people smoke less if they have to travel further to buy tobacco products (Altman & Jackson, 1998). However, findings about the relationship between number of tobacco outlets in an area and youth smoking are mixed (Novak,Reardon, Raudenbush, & Buka, 2006). Today’s ASHES reviews a study that investigates if local tobacco policies (e.g., clean air laws) affect the relationship between tobacco outlet density and youth smoking (Lipperman-Kreda,Grube, & Friend, 2012). 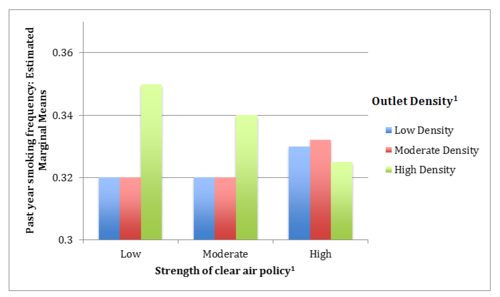 The results of the study confirm the previous findings (Novak, et al., 2006) that the number of retail tobacco outlets in the area is positively related to the average frequency of youth smoking in the same area. The new finding, however, is that the importance of density is moderated by the local clean air policy. The density was less important for the cities with strong clean air policies. Therefore, the results suggest both the control over the number of tobacco outlets in the area and enforcement of the clean air policies as potential mediums for preventing youth smoking.