« The WAGER, Vol. 18(5) – Should I sleep on it? How mental fatigue affects risky behavior | Main | ASHES, Vol. 9(5) – Easy to get, but tough to smoke? Relationships among clean air policy, tobacco outlet density, and youth smoking. »

The DRAM, Vol. 9(5) - A DUI but no diagnosis? How DSM-5 might impact the identification of Alcohol Use Disorders

Imagine a man who drinks in dangerous situations, such as when driving, but doesn’t meet any other criteria for alcohol use disorders. According to the DSM-IV, this man is experiencing alcohol abuse.  The DSM-IV separates alcohol use disorders (AUDs) into alcohol abuse, characterized by serious negative consequences due to drinking, and alcohol dependence, characterized by physical symptoms related to drinking (APA, 1994); it also requires only one criterion for a diagnosis of alcohol abuse. However, under the new DSM-5 guidelines scheduled to be released this month, our hypothetical man’s diagnostic situation would change. The DSM-5 does not make separate diagnoses for alcohol abuse and dependence but makes a single diagnosis of AUD along a severity continuum and requires a minimum of two criteria. In addition, the DSM-5 substitutes a current criterion related to legal consequences of alcohol for a new criterion related to alcohol craving. This week the DRAM reviews a study that investigated how these potential changes will affect diagnosis and prevalence of AUDs (Agrawal, Heath & Lynsky, 2011). 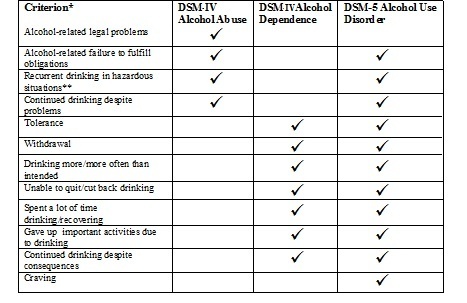 * Each criterion is represented by one to three AUDADIS items
** Includes an item measuring drinking and driving.

·         As shown in Table 1, 1,033 people who did not qualify for alcohol abuse or alcohol dependence according to DSM-IV criteria qualified for an alcohol use disorder according to DSM-5 criteria. All of these were classified as having a moderate AUD.

o   The overwhelming majority of these people (96.5%; n= 636) endorsed the criterion for drinking in hazardous situations, in particular an item measuring drinking and driving.

Table 1. Diagnoses of AUDs According to DSM-IV and DSM-5 in the NESARC Wave II Sample (adapted from Agrawal, Heath & Lynsky, 2011)

The changes in the DSM-5 had a modest positive effect on the prevalence of AUD , though the addition of the craving criterion did not play a major role in this re-classification. Those who met criteria for AUD under DSM-IV but not under DSM-5 were most likely to endorse the criterion for drinking in hazardous situations. This, combined with the fact that the DSM-5 requires a minimum of two criteria, means that people like the man described above switch from a diagnosis of alcohol abuse to no diagnosis at all. Under DSM-5, these individuals could lose important treatment resources. In addition, there is still debate about whether alcohol abuse and alcohol dependence are two fundamentally different disorders that require different treatment approaches; by condensing them into one, we may lose some important information. Finally, future research might focus on further refining and exploring the divisions of “moderate” and “severe” AUD within DSM-5 diagnoses.

Posted at 04:40 PM in The Drinking Report for Addiction Medicine (DRAM) | Permalink