« STASH, Vol. 9(5) – Maybe problems don’t last forever: An alternative view of remission from drug dependence | Main | The DRAM, Vol. 9(5) - A DUI but no diagnosis? How DSM-5 might impact the identification of Alcohol Use Disorders »

The WAGER, Vol. 18(5) – Should I sleep on it? How mental fatigue affects risky behavior

Factors such as mental fatigue and the outcomes of previous bets might influence how we make decisions about risk. However, previous research reveals inconsistent findings about these factors. Being  “cognitively-depleted”—in other words, being mentally fatigued—sometimes promotes riskier behavior and sometimes promotes more conservative decision making (Freeman & Muraven, 2010; Unger & Stahlberg, 2011). Likewise, it is unclear how the outcome of previous bets influences risky decisions (Demareee, Burns, DeDonno et al., 2012). This week’s WAGER reviews a study of the effects of both cognitive depletion and with the outcome of previous bets on risky gambling behavior (Kostek & Ashrafioun, 2013). 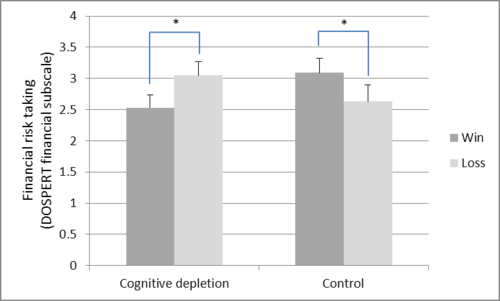 Understanding situational factors could be important to preventing gambling-related problems. In this study, self-reported financial risk varied in a complicated manner-- control subjects reported that they were more likely to engage in risky behavior after doing well at blackjack. In contrast, mentally fatigued participants were more drawn to risk after a series of losses. However, this effect was not apparent at a statistically significant level when the outcome was actual bets—participants bet more when not mentally fatigued and after a series of wins. This highlights the inconsistency between self-reports and actual behavior. Additional research could help to explain this inconsistency.

Posted at 03:32 PM in The Worldwide Addiction Gambling Education Report (The WAGER) | Permalink