« Op-Ed/Editorials - Can Massachusetts evaluate the impact of its gambling expansion? | Main | STASH, Vol. 9(7) - Can you hear me now? How MDMA might compound hearing loss suffered in loud environments »

ASHES, Vol. 9(6) – Smoking in the Digital Age: Awareness of e-cigarettes in four countries

Electronic cigarettes (i.e., e-cigarettes) are devices in which solution containing nicotine is atomized by a heating coil and then inhaled. These e-cigarettes, mentioned in ASHES, Vol. 9(4), are a relatively new addition to the nicotine product landscape. Since entering the market less than ten years ago, they have faced increased scrutiny from policymakers (e.g., DeLancey, 2010), including outright bans in Canada (Health Canada, 2009) and Australia (Australian Government Therapeutic Goods Administration, 2013) due to questionable health and safety evidence. This week’s ASHES reviews a study that measured the awareness, attitudes and usage of e-cigarettes in four industrialized nations (Adkison et al., 2013). 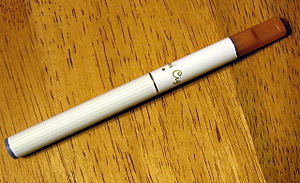 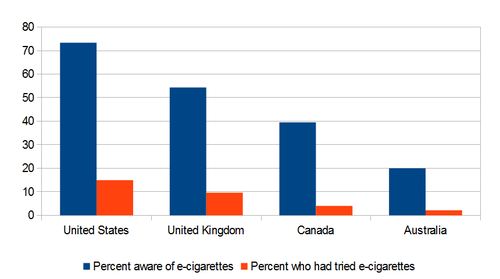 Larger percentages of smokers know about e-cigarettes in the countries where e-cigarettes are legal, presumably due to differences in marketing efforts. For example, in the U.S., smokers are exposed to ads via magazines and on television. Despite a lack of solid evidence, a substantial number of people believe that e-cigarettes are less harmful than traditional cigarettes. Even in the two countries where they were banned, nontrivial percentages of people reported trying or using e-cigarettes. Through internet sales and other means, consumers are finding ways around the restrictions. Researchers should conduct more studies and clinical trials to determine if e-cigarettes are truly less harmful, if they can actually help people quit, and if so, how they can be used as part of smoking cessation programs.

[1] Some respondents had quit smoking between enrollment and Wave 8, but still remained in the sample for follow-up interviews.

Yes, much more research needs to be done, but currently there is enough science out there to reasonably say that these are "truly" less harmful than tobacco cigarettes (try 99%), and are much more effective than NRTs in helping people quit smoking. I am doing some informal research in addiction treatment centers who allow ecigs, and we're getting at least a 50% reduction in tobacco use. With at least 5 million smokers using these things you would think that the people with the money to fund more research would be jumping at the opportunity to save lives here, but it appears that the tobacco and pharmaceutical industries are getting in the way. Let's advocate for more research here, but fighting ecigs in the meantime is like telling a drowning man not to get into a lifeboat because it might have a leak.