STASH, Vol. 9(7) - Can you hear me now? How MDMA might compound hearing loss suffered in loud environments

The arrival of summer often delivers waves of music festivals. Attendees at festivals and other events featuring electronic dance music typically experience long periods of loud music. In addition, these events often are common settings for the use of the psychoactive drug “Ecstasy” (3,4-methylenedoioxy-N-methamphetamine; MDMA; Weir, 2000).  Although research suggests that frequent exposure to loud music can impair hearing  (Williams, Beach, & Gilliver, 2010), some have suggested that MDMA might also play a role in hearing loss due to how it modulates certain neurotransmitters that might be neuroprotective against noise exposure (Lendvai et al., 2011). This week’s STASH reviews an animal model study that explores how MDMA might affect noise-induced hearing loss (Church, Zhang, Langford, & Perrine, 2013).

Figure 1. Threshold shift of Auditory Brainstem Response before and after treatment. Adapted from Church et al. (2013). 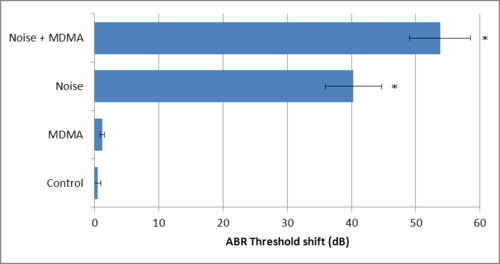 This study showed that although MDMA does not inherently produce any hearing loss; however, it can exacerbate any hearing loss that results from exposure to loud environments. This suggests that ecstasy users in club and concert environments might suffer an increased amount of noise-induced hearing loss than their non-using peers. The authors indicate that this could be due to MDMA’s reduction of serotonin and dopamine among users, two neurotransmitters that might play a protective role against noise induced hearing loss (Lendvai, et al., 2011). This suggests that other substances affecting serotonin and dopamine, such as LSD or certain anti-depressants, should be investigated as potential hearing loss contributors as well.

Posted at 12:10 PM in Science Threads on Addiction, Substance Use, and Health (STASH) | Permalink