ASHES, Vol. 9(8) - When dramatic becomes dangerous: The relationship between smoking in movies and adolescent smoking

Lacking a stable identity and searching outside of the self for acceptance is a combination that makes adolescents an especially impressionable age group often influenced by the messages within their environment. Substantial evidence suggests that exposure to smoking in movies is causally related to the initiation of smoking among U.S. adolescents. However, European youth have more access to movies that feature smoking, as many European countries have less strict regulations for smoking imagery in film (Morgenstern et al., 2013). This week’s ASHES reviews the first longitudinal study to examine the relationship between exposure to smoking imagery in movies and smoking initiation outside the U.S. (Morgenstern et al., 2013).

Figure 1: Relationship between exposure to smoking in movies and adolescent smoking onset before and after adjustments for variables (adapted from Morgenstern et al., 2013). 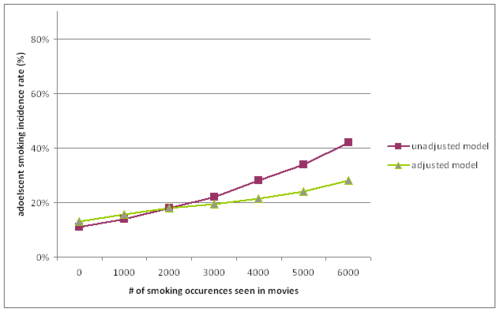 Note: In addition to the number of smoking occurrences seen in movies, many other variables (such as parental smoking) may affect adolescent smoking initiation. The adjusted model therefore shows the relationship between smoking onset and exposure to smoking in movies after controlling for other variables.

This study is one of the largest longitudinal studies to examine the relationship between exposure to smoking in movies and smoking initiation in adolescents. The results suggest cross-cultural evidence for the effect of smoking scenes on impressionable adolescent audiences that are still developing their self-image and searching for acceptance. Though smoking may add a dramatic element to cinema, it becomes a public health concern when many adolescents start smoking after watching role models smoke on the screen.