STASH, Vol. 9(10) - 140 characters at a time: Attempting to track Adderall use with Twitter

Figure 1 A log-scale of commonly-mentioned side effects in Adderall-related tweets. "Other" refers to unique mentions of side-effects (i.e. they did not come from the set of keywords used by the researchers). 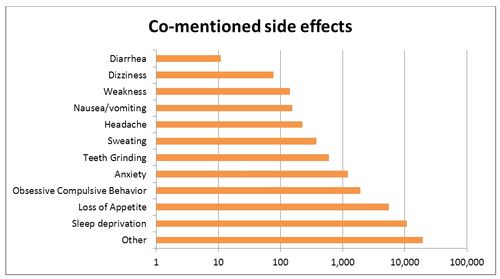 Twitter may be a new milieu in which to track trends in public health, including behavioral health. Students who are using Adderall as a study aid likely represent a large proportion of people sending these tweets. This conclusion is supported both by  the subset of tweets that explicitly mentioned Adderall used as a study aid (13%), and by the observed fluctuation in tweets (i.e., that users tended to tweet about Adderall during the middle of the week and especially during December and May, when schools traditionally hold final exams). Beyond public health monitoring, social media, including Twitter, could provide a simple and easily accessible way to disseminate public health information and health promotion messages.