« The DRAM, Vol. 9(10) – If at first you don’t succeed, try, try again: Alcohol outlet compliance rate does not tell the whole story about underage alcohol availability | Main | STASH, Vol. 9(11) – I’d do this, but not that: Estimating the harms of using different psychoactive drugs »

Figure 1: Example of a Tips Advertisement 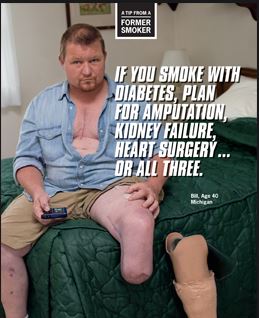 The study’s results suggest that graphic national anti-smoking campaigns might generate some population-level public health benefits. People who viewed emotionally-stirring warnings about the disturbing effects of smoking on health were more likely to try quitting smoking. This puts media campaigns within the cadre of other successful public health interventions. Future studies could examine how long the campaign effects last, and which factors, if any, contribute to decline in smoking attempts after the three-month period.