STASH, Vol. 9(11) – I’d do this, but not that: Estimating the harms of using different psychoactive drugs

Many countries, including the United States, have developed classification systems for drugs based on their estimated risk for abuse, dependence, and negative consequences. However, it is not clear if these official systems reflect regular users’ opinions regarding the harmfulness of different drugs. Today’s STASH reviews a study that investigates how well official UK and US drug harmfulness classifications reflect regular drug users’ opinions of drug harmfulness (Morgan, Noronha, Muetzelfeldt, Fielding & Curran, 2013). 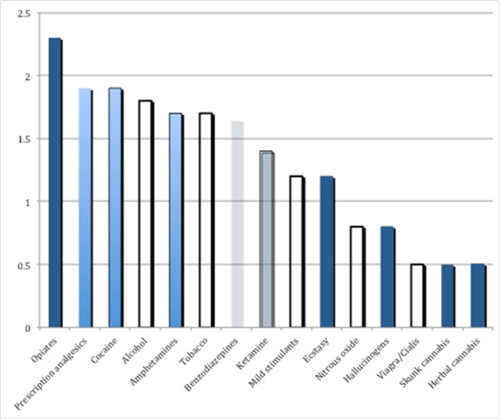 Note:  The shade intensity reflects the rank of the drug according to the US Controlled Substance Act. The darkest shade indicates Schedule 1 drugs (i.e., drugs that have highest potential for abuse and not allowed to be used even for medical treatment, such as ecstasy). The next lighter shade refers to Schedule 2 drugs (i.e., drugs that have high potential for abuse, but allowed under medical supervision with severe restrictions such as cocaine). Further lighter shade means Schedule 3 drugs (i.e., drugs that may lead to moderate or low physical dependence and have a less potential to abuse compared to the drugs from Schedule 1 and 2, such as, ketamine). The lightest shade means drugs of Schedule 4 (i.e., low potential for abuse that may lead to limited physical or psychological dependence, such as benzodiazepines). Not shaded date points mean unclassified drugs (e.g., alcohol).

The study found no relationship between official drug classifications and users’ perceptions of drug harms. This could imply that formal drug classification does not reflect the actual harms and benefits of certain drugs. Alternatively, it might suggest that public health information has not been sufficient to give regular drug users appropriate knowledge about the actual harms and benefits of the substances they use. It also might be that both ranking systems do not accurately reflect drug use harms. Although it is unclear whether it is important that drug users’ perceptions of harms and benefits agree with the official classification, if consistency is valuable to reducing drug-related harms, it implies that the policy makers, scientists and educators should work together to reduce the gap between the official drugs classification and common perceptions of drug harm.

[1] Researchers also asked about benefits of drugs, however, this data is not presented here.

Posted at 05:11 PM in Science Threads on Addiction, Substance Use, and Health (STASH) | Permalink