ASHES, Vol. 9(12) - This Thanksgiving, choose turkey over cigarettes: Associations between smoking and overeating among women

Many women smoke based on a belief that smoking helps to control weight (Camp, Klesges & Relyea, 1993; John, Meyer, Hapke, Rumpf, & Schumann, 2004). Today, as most Americans prepare for a big Thanksgiving feast, ASHES reviews a study that examines if using smoking as a mean to control weight is a general phenomenon, or is more likely to be found among those who have unhealthy relationship with food, as evidenced by binge eating and eating disorder symptoms (White, 2012).

Figure 1. Total eating disorder symptom score as a function of response to eating and smoking questions (adapted from White, 2012). 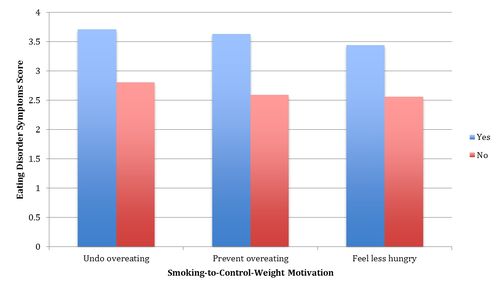 Women who reported smoking to control weight had more symptoms of eating disorders and engaged in binge eating more frequently than those who did not. To further understand the relationship, it is important that future studies investigate patterns of smoking and eating behaviors across time; only such prospective study can determine causal can temporal associations. For now, it might be best to put the cigarettes away and enjoy your Thanksgiving dinner. Happy Thanksgiving!

[1] The Eating Disorder Examination-Questionnaire (EDE-Q; Fairburn, & Beglin, 1994) measures  frequency of binge eating episodes (i.e., eating unusually large amounts of food while experiencing a sense of loss of control over the eating) and purging as well as dietary restraint, eating concerns, weight concerns, and shape concern. It also provides as well as an overall score, which is reported in this review.