« The WAGER, Vol. 18(12) – Two roots and a hundred branches: Classes of misconceptions about gambling | Main | ASHES, Vol. 9(12) - This Thanksgiving, choose turkey over cigarettes: Associations between smoking and overeating among women »

The DRAM, Vol. 9(12) - Drinking to cope: Stress, emotion, and cravings among heavy drinkers

The holiday season is upon us with all its trappings, from cocoa and pumpkin pie to stress and depression. People react to stress in different ways. Some hunker down, some go for a run, and some reach for the bottle. Research suggests that women and men tend to react differently to stress, and that those different reactions might in turn have different effects on drinking behavior (Rubonis,Colby, Monti, Rohsenow et al., 1994). This week, the DRAM reviews a study that examined stress-induced alcohol craving and negative emotion among female and male heavy drinkers (Hartwell & Ray, 2013).

Figure 1: Alcohol Craving as a Function of Imagery Condition and Sex (adapted from Hartwell & Ray, 2013) 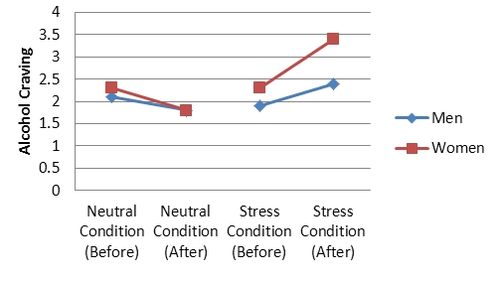 This study suggests that among heavy drinkers, women are more reactive to stress than men and experience more negative emotion related to that stress, leading them to crave alcohol more strongly. In stressful situations, women who drink heavily might be more susceptible than men who drink heavily to developing alcohol-related cravings, which in turn could promote unhealthy drinking behavior. Interventions for alcohol abuse and dependence might do well to target women dealing with stressful life events, and focus on improving coping mechanisms.

Posted at 12:37 PM in The Drinking Report for Addiction Medicine (DRAM) | Permalink