« The DRAM, Vol. 9(13) – How do you deal?: Exploring possible mediators between trauma and physical health complaints. | Main | Thank You to our Organizational Sponsors »

As awareness about and use of e-cigarettes has grown across the globe (ASHES Vol. 9(6)), these devices have come under more scrutiny from researchers and public policy experts. E-cigarettes are gaining popularity because like nicotine patches, they provide a low dose of nicotine, contain fewer toxins than cigarettes, and simulate behavioral and sensory dimensions of smoking. However, because e-cigarettes are a relatively new technology, there is a paucity of research to inform discussions about safety and efficacy. This week’s ASHES reviews a recent randomized control trial examining the efficacy of e-cigarettes compared to placebo and nicotine patches for smoking cessation (Bullen et al., 2013). 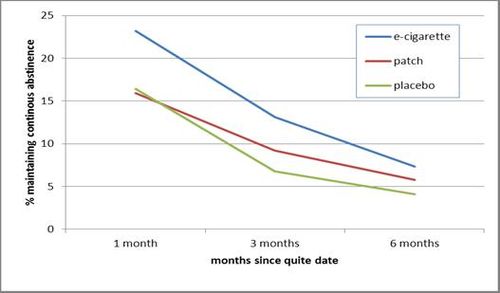 The efficacy of e-cigarettes to help individuals quit smoking remains unresolved. This study suggests that e-cigarettes are as effective as the patch in terms of abstinence at 6-months, and appear to be more effective initially. Researchers also found some promising results including a longer time to relapse and larger reductions in the number of cigarettes smoked per day among e-cigarette users compared to patch users. In addition, e-cigarette users reported adverse events at similar rates compared to the other two groups.  Future research should attempt to replicate the study with larger samples and varying nicotine doses.