The DRAM, Vol. 9(13) – How do you deal?: Exploring possible mediators between trauma and physical health complaints.

Psychological trauma has adverse consequences for the body as well as the mind. Some research suggests that the way we cope influences how psychological trauma influences physical health (Lawler et al., 2005). This week’s DRAM reviews a study examining how avoidant coping and drinking mediate the relationship between sexual trauma and physical complaints (Bedard-Gilligan,  Cronce, Lehavot, Blayney, & Kaysen, 2013). 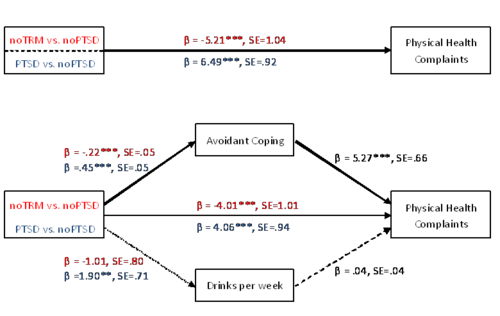 These results indicate that PTSD is associated with more physical complaints, drinking, and avoidant coping strategies. It would seem intuitive that individuals who are self-medicating their emotional pain would experience physical health complaints due to their drinking. This study, however, suggests that avoidant coping (measured in a way that excludes substance use behaviors) is in fact a stronger explanation for the link between trauma/PTSD and the experience of physical health complaints than drinking. Both the trauma itself, and the PTSD symptoms over and above the trauma alone, appear to increase risk for an avoidant coping pattern of behavior that might in turn create physical health problems.  There should be easy access to interventions which help survivors address  underlying coping processes, possibly through Cognitive Behavioral Therapy, to help, eventually, alleviate both mental and physical distress.

Collins, R., Parks, G. A., & Marlatt, G. (1985). Social determinants of alcohol consumption: The effects   of social interaction and model status on the selfadministration of alcohol. Journal of Consulting and Clinical Psychology, 53(2), 189-200.

Finkelhor, D. (1979). What’s wrong with sex between adults and children? Ethics and the problem of sexual abuse. American Journal of Orthopsychiatry, 49(4), 692-697