« STASH, Vol. 9(13) – Prescription stimulant use among high school seniors | Main | The DRAM, Vol. 9(13) – How do you deal?: Exploring possible mediators between trauma and physical health complaints. »

The WAGER, Vol. 18(13) – For a limited time: How self-imposed caps change gambling activity

Many online gambling operators offer self-limiting features, allowing players to set limits on how much money or time they spend gambling. Although it is up to the player to set his or her own limits, once in place, the sites strictly enforce the limits. During 2008, Nelson et al. noted that players who used such features altered their behavior, gambling less than before they set the limits. More recently, Auer and Griffiths used a concept they call “theoretical loss” (explained in more detail below) to explore whether self-imposed limits change the behavior of what they consider “high-intensity” gamblers. This week’s WAGER looks at how Auer and Griffiths define “high-intensity” and whether self-imposed time and deposit limit changes are associated with changes in the behavior of high-intensity gamblers (Auer & Griffiths, 2013). 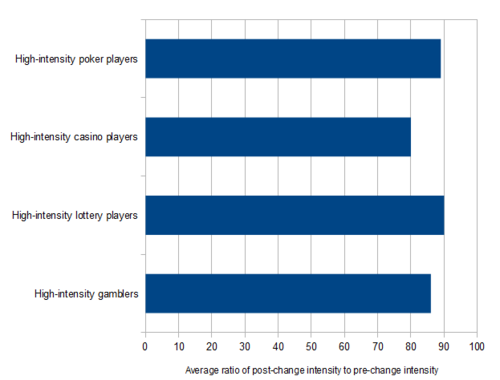 Research has shown that self-limitation affects online gambling behavior (Nelson et al., 2008). Auer and Griffiths’ results suggest that voluntarily setting limits also might be an effective way of controlling the betting activities of high-intensity gamblers. By building the enforcement into the software itself, the sites take the decision away from the player during active gambling sessions, a time that might impair decision-making. In games where players’ decisions matter more, such as blackjack and poker, these self-limiting features can help gamblers make sure that they play only when their minds are clearer, they are playing their best,  and they have the proper perspective on their wins, losses, and time spent.