ASHES, Vol. 10(1) - Homeless or not, where there’s smoke, there’s desire: Smoking and desire to quit among homeless individuals

In the absence of affordable alternatives, some people turn to risky behaviors as a way to cope with stress. Homelessness presents a unique set of challenges that could exacerbate risky health behaviors such as smoking cigarettes. Research has identified higher rates of smoking in homeless populations compared to the general population (CDC, 2011). In this fourth installment of our Special Series on Homelessness and Economic Hardship, we examine the links among homelessness, smoking behavior, and the desire to quit smoking. 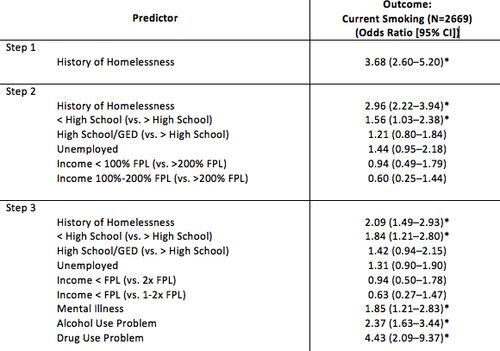 This study suggests that people who have experienced homelessness are more likely than others to be current smokers, even when other socioeconomic and psychological factors are taken into account. However, researchers also found that there was no difference between homeless and non-homeless smokers in their desire to quit smoking. This suggests that homeless smokers are interested in quitting, and that resources should be directed toward the homeless population accordingly. Future research could investigate the direction of the relationship between smoking initiation and homelessness. This would help identify the best time for effective behavioral interventions.