The DRAM, Vol. 10(1) – Inhibition or indulgence? Changes in drinking behavior during the great recession

During the Great Recession of 2007-2009, the unemployment rate in the United States doubled from just under 5% during 2007 up to a high of 10% during 2009 (Bureau of Labor Statistics (BLS), 2013). It is unclear how economic hardship affects drinking behaviors (Catalano, Dooley, & Wilson, 1993; Ruhm & Black, 2002). This week the DRAM reviews a study that attempts to shed some light upon this issue by examining drinking habits in the US changed during the recent recession (Bor, Basu, Coutts et al., 2013), as part of our Special Series on Homelessness and Economic Hardship.

Figure 1: Drinking behaviors before and during the Great Recession (reprinted from Bor et al. 2012 with permission from Oxford Journals) 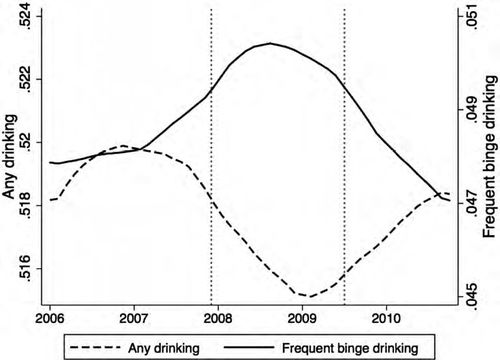 This finding suggests that people who were surveyed during the recession were more likely to abstain from drinking than those surveyed before the recession, but those who did drink during the recession tended to drink more heavily. This suggests that there are two different factors at play. Previous research has proposed an “income-effect” which suggests that lower income translates into a lesser means to purchase alcohol (Ruhm & Black, 2002), which might be operating among the people who chose not to drink at all. Additionally, a “provocation” effect has been proposed that suggests that individuals who do drink might drink more because they turn to alcohol to cope with job insecurity or financial stress (Catalano, 1997). The fact that the results are still significant after controlling for income and employment status suggests that factors other than an individual’s immediate financial state (e.g., anxiety about potential job loss) might be involved, and that further research is necessary to uncover these factors.

Posted at 09:37 AM in Special Series, The Drinking Report for Addiction Medicine (DRAM) | Permalink