« Thank You to our Organizational Sponsors | Main | The WAGER, Vol. 19(1) - From full house to no house: Housing stability and gambling-related problems »

Homeless youth are more likely to have substance-using peers than housed youth (Greene, Ennett, & Ringwalt, 1997). As a result, among homeless youth, peers might tend to reinforce high-risk behaviors, a process known as “deviancy training” (Dishion & Dodge, 2005). However, we know little about which peer characteristics predict shared drinking and drug use among homeless youth, and this information will be important to designing the most effect interventions. Today’s STASH reviews a study examining the characteristics of people with whom homeless youth engage in substance use (Green et al., 2013), as part of our Special Series on Homelessness and Economic Hardship. 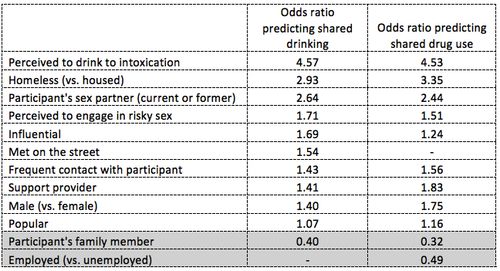 Several social network member characteristics predicted shared substance use among homeless youth.  Results suggest that homeless youth are most likely to engage in substance use with other homeless youth whom they met on the street and who engage in their own risky behaviors, are sex partners, are frequently available, and are seen as influential and supportive.  These groups of peers might be most likely to encourage substance use and other forms of deviancy training. However, other research indicates that homeless adolescents maintain contact with their home-based peers, who are less likely to misuse substances, via social networking (Rice, Milburn, & Monro, 2011). Healthcare workers might try to strengthen homeless youths’ ties with family members and with  home-based peers, so that these peers become more available, influential, and supportive.

[1] The alters’ status as influential was measured on a continuum from 1-3, according to how many of the following characteristics they met: among the core group of people with whom the alter hung out; someone whose opinion mattered a great deal to the participant; and someone who was viewed as a leader or role model by the community.

[2] Popularity was defined as the number of relationships an alter shared with other people within the participant’s social network.