Most married couples share smoking status – they either both smoke or both abstain. But in some marital relationships, one partner tries to quit but the other does not. In these relationships, research shows that smoking cessation is particularly difficult and relapses are common (Homish & Leonard, 2005). One factor that has the potential improve these odds is partner support for quitting. However, research in this area is mixed (see Collins, Emont, & Zywiak, 1990), and no research has examined the role of more general spousal support on smoking behavior and cessation across time. In this third installment of our Special Series on Addiction within Relationships, this week’s ASHES reviews a longitudinal study that examined the role of general partner supportiveness on smoking behaviors across time (Derrick, Leonard, & Homish, 2013). 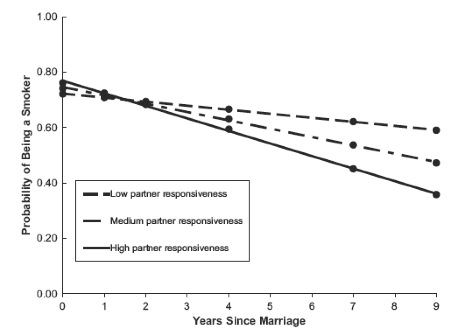 This study found that general perceived partner supportiveness predicted decreases in smoking within couples across time. These results suggest that, for successful smoking cessation, feeling supported in your relationship might be just as important, if not more important, than whether you partner specifically supports your decision to quit smoking. These results add to an expanding body of literature linking social support to health and well-being (e.g., Homish & Leonard, 2008). Future research needs to assess both general supportiveness and specific support for quit attempts within couples to determine the relative importance of these constructs.

1 This concept was measured using the emotional intimacy subscale of the Personal Assessment of Intimacy in Relationships (PAIR: Schaefer & Olson, 1981).

2 The researchers used multilevel models that accounted for the fact that data were nested within couple.