« The DRAM, Vol. 10(3) - Skip two drinks and call me in the morning: Screening for risky drinking at the doctor's office | Main | STASH, Vol. 10(4) - Ask the children: Reasons for adolescent substance use and recovery from substance use disorders »

ASHES, Vol. 10(3) - E-volution: E-cigarette use patterns over one year

Editor’s Note: Today’s ASHES was written by Kerry Brechbiel. Kerry is a special contributor to the BASIS and a graduate student at East Carolina University.

Electronic cigarettes (e-cigarettes) have become a popular alternative to smoking, viewed as a cleaner, safer way to obtain a nicotine fix (Ungar, 2014).  Although there is a paucity of scientific research on e-cigarettes, preliminary evidence suggests that their use might reduce cigarette use and increase smoking cessation (Bullen et al., 2013; Caponnetto et al., 2013; see ASHES 7(3) and ASHES 9(13)).  This week, the ASHES reviews a longitudinal study of behavior change among e-cigarette users across 12 months (Etter & Bullen, 2014). 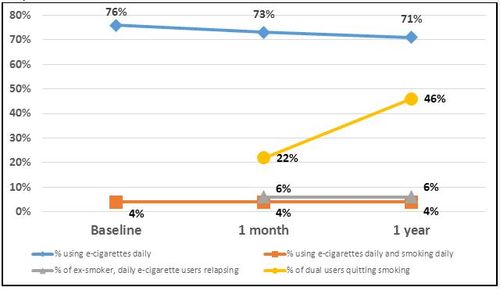 Conclusion
In this study, the majority of daily e-cigarette users remained using throughout the 12 month study, signifying that e-cigarette use might be a chronic behavior for many users. Among the small number of participants who were both smoking and using e-cigarettes at baseline, many stopped smoking.  However, this study was not able to establish a causal link between e-cigarette use and smoking behaviors.  Future research is needed to replicate these findings for further validation with a larger and more representative sample.  Researchers should look into the specifics of how e-cigarette use directly contributes to smoking cessation, including comparing e-cigarette use to other cessation tools.  In addition, this study indicates that future research should examine the health consequences associated with the chronic use of e-cigarettes.

What is the age range of subjects in this study? It is my belief that younger people (teens/young adults) use e-cigarettes for different reasons than someone who has been smoking much longer.