Research suggests that adolescents often drink or use drugs for very distinct reasons. For example, some might use substances for “enhancement” (i.e., because they like it) and others might do so to escape depression or anxiety (Kuntsche et al., 2010). Understanding adolescents’ reasons for drinking is important to maximizing positive treatment outcomes. This week’s STASH looks at the association between reasons for alcohol or drug use (i.e., enhancement versus coping) and the effectiveness of skills-based group interventions (Dow and Kelly, 2013).

Figure 1: Average PDA at different time points among those who for use for enhancement and those who use for coping (adapted from Dow and Kelly, 2013). 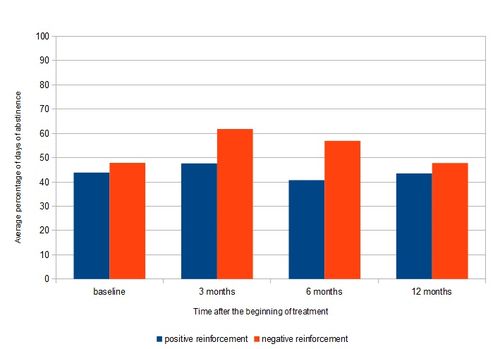 In this study, adolescents attending a skills-based group intervention showed more positive outcomes if they used drugs or alcohol for coping reasons as compared to those who used for enhancement reasons. However, the difference in the effect dissipated within a year of the beginning of treatment. Still, this study illustrates that different people respond differently to treatment. Determining which differences are important to treatment efficacy is a first step towards developing more individualized, more targeted, and more effective treatments for substance use disorders.

1Eighteen adolescents were not considered eligible to participate, 8 did not agree to be contacted by study staff, and 25 did not enroll in the study. When researchers asked the remaining 127 adolescents to provide a reason for substance use, 18 gave either ambiguous responses or no response at all.

One of your limitations is "The researchers categorized participants into enhancement versus coping groups, but in reality some people might use substances both for enhancement and for coping." The article reports that 10 participants reported both PR and NR status. Since this number was so small, meaningful analyses were not feasible, and these individuals were excluded from the analyses.

Thank you for the clarification. The BASIS writing staff appreciates readers who offer constructive comments.