« Tuesday, March 11 is Gambling Disorder Screening Day: Are you going to do a brief screen? | Main | ASHES, Vol. 10(3) - E-volution: E-cigarette use patterns over one year »

The DRAM, Vol. 10(3) - Skip two drinks and call me in the morning: Screening for risky drinking at the doctor's office

Binge drinking continues to be a major cause of illness and death in the United States. Research strongly suggests that screenings and brief interventions can reduce alcohol consumption with lasting positive effects (e.g., Maciosek et al., 2009). The National Institute on Alcohol Abuse and Alcoholism (NIAAA) recommends that health professionals screen their patients for binge drinking and deliver brief interventions if they deem patients to be at risk. However, we know little about how frequently health professionals do this. In The DRAM this week, we review a nationwide survey that asked people if they had ever spoken to their doctors about alcohol use (McKnight-Eily et al., 2014).

Figure 1: Percentage of survey respondents who have ever spoken with professionals about alcohol use, by age group. Adapted from McKnight-Eily et al., 2014. 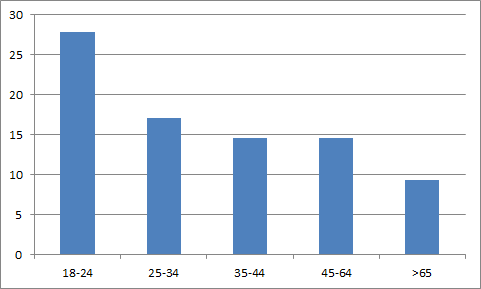 These results indicate that screening rates for alcohol use are very low in the United States. Only 1 in 6 people reported that their doctors had ever asked them about their alcohol use. Younger adults and binge drinkers were more likely to report that they had spoken with a health provider about alcohol; however, the rates were still low. Doctors might shy away from asking their patients about alcohol use because they think that they do not have the resources to deal with the underlying issues. In reality, most patients who drink too much will only require brief counseling, not specialized treatment. Medical professionals should receive instruction in the addictions as part of their education so that they feel more comfortable having these conversations. Medical educators and health system administrators should focus on advocating for standardized brief screening procedures.