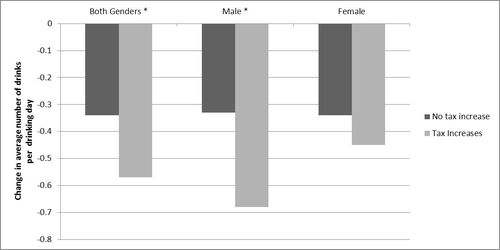 Smokers in states that increased their cigarette tax showed steeper declines in alcohol consumption and binge drinking. One possible explanation is that the increased cost of smoking reduces the disposable income that could be used for alcohol purchases. Cigarette taxes have less of a direct influence on non-smokers, so it is not surprising that higher cigarette taxes were unrelated to drops in drinking. Although causal relationships cannot be determined without additional studies, these results suggest that policies targeting alcohol or smoking might result a cross-over effect.